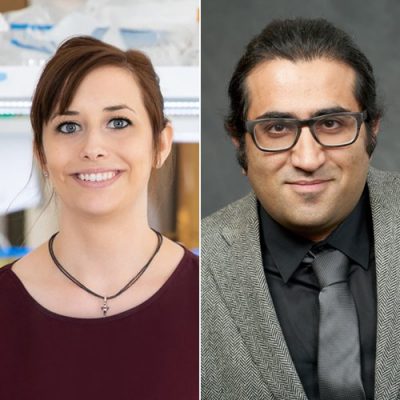 Researchers from the College of Arts and Sciences’ Department of Physics and Department of Chemistry have been awarded Maximizing Investigators’ Research Award (MIRA) grants from the National Institute of General Medical Sciences (NIGMS), part of the National Institutes of Health (NIH). The funding, awarded to Alison Patteson, assistant professor of physics, and Davoud Mozhdehi, assistant professor of chemistry, supports research that increases understanding of biological processes and lays the foundation for advances in disease diagnosis, treatment and prevention.​

Patteson and Mozhdehi, both members of the BioInspired Institute, a collaboration of researchers from Syracuse University addressing global challenges through innovative research, are working to learn more about the function and design of proteins that play a key role in diseases such as cancer. Each MIRA award will fund research in their labs over the next five years.

Since coming to Syracuse University in 2018, physics professor Alison Patteson and her group have led cutting-edge studies on the structural protein vimentin. Often expressed in a cell’s cytoskeleton during cell motility (movement), vimentin plays a key role in protecting the cell’s nucleus and DNA from damage as it migrates through dense tissue during processes like cancer growth and wound healing. By knowing more about vimentin’s role in protecting cancerous cells as they spread through the body, Patteson says her group’s research could help pinpoint drugs that could slow the growth of cancer. 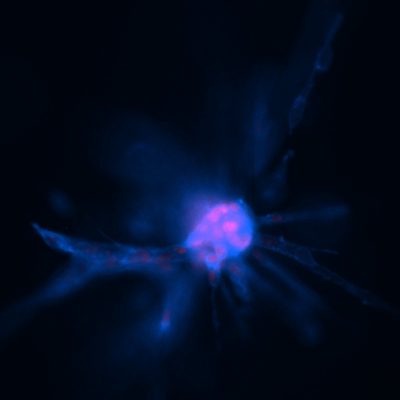 With her MIRA grant, Patteson seeks to broaden understanding of vimentin’s function in cells as they move. She says the grant will help her team tackle three objectives: determine how vimentin affects the cytoskeleton (structure that helps cells maintain shape) during migration; explore how vimentin helps the cell adhere to its surroundings; and identify the mechanisms by which vimentin helps facilitate collective cell migration through the three-dimensional network surrounding cells called the extracellular matrix.

“Our aim with this grant is to understand how vimentin regulates cell motility,” says Patteson. “We’ve seen proof that it does but we don’t understand why.” She says their research will answer important questions including: Why do motile cells express vimentin? And, what advantage does vimentin give to the cell?

“Vimentin is very understudied and this funding will help us answer some big questions about how this protein is influencing the cell and in turn how biological processes such as cancer and wound healing are affected,” says Patteson.

Thanks in part to her MIRA grant, Patteson and her colleagues recently developed one of the first 3D simulations capturing how cells containing vimentin move through body tissue. In the absence of vimentin, their model showed a breakdown of the cell’s nucleus as it moved through narrow channels. In simulations with vimentin, the cell was much more resistant to deformation and the inside of the nucleus and its DNA was protected.

Proteins are the body’s workhorse machinery and play a key role in maintaining the structure and function of cells, building and repairing tissue, and fighting disease-causing bacteria and viruses. To carry out these diverse roles, cells decorate their proteins with accessories that give them unique properties. For example, almost a third of human proteins are modified with fats, a process known as lipidation, which is critical for the smooth running of the intricate cellular machinery. Despite the essential role of lipidation in all aspects of biology, current technologies to create lipidated proteins are out-of-date, time-consuming, expensive and have a low synthetic yield, says Davoud Mozhdehi (Dave Moz), assistant professor of chemistry. The ability to quickly generate lipidated proteins would allow researchers to deepen the understanding of their role in various diseases.

The MIRA grant supports Mozhdehi and his team’s development of ground-breaking technologies that can significantly simplify and streamline the synthesis of lipidated proteins. The team is genetically engineering bacteria (which do not normally lipidate their proteins) with lipidation machinery from human cells for scalable and inexpensive production of lipidated proteins. One significant advantage of this technology platform is its customizability.

“It is like operating a virtual machine that can run user-defined programs parallel to the bacteria’s native operating system,” says Mozhdehi. This capability enables researchers to change the structure of both proteins and lipids quickly, creating libraries of lipidated proteins hundreds of times faster than currently possible.

The grant will fund the work of undergraduate students, graduate students and a postdoctoral researcher over the next five years in Mozhdehi’s lab. So far, this work has culminated in two manuscripts and two patent applications, a feat that highlights the innovative and potentially transformative nature of the project. The MIRA grant will also support the purchase of a new light scattering instrument that will help researchers reveal the structure-function paradigm of lipidated proteins by evaluating their biophysical properties.

The platforms developed by this grant synergize and build on the lab’s recent efforts to create therapeutics and biomaterials from lipidated proteins, exciting new directions recently funded by a grant from the National Science Foundation to Mozhdehi and Shikha Nangia, associate professor of biomedical and chemical engineering in the College of Engineering and Computer Science.

Mozhdehi’s team is now developing a new class of lipidated protein switches (liposwitches), which can shuttle between membrane and cytoplasm to regulate cell behavior. “Creating these liposwitches would help us mimic the sophistication of biology,” says Mozhdehi. “Being able to take a protein, move it back and forth, and control the response of a cell could have major implications for treating chronic pain and diseases like cancer and diabetes.”

These advancements can foster the development of next-generation biomaterials and therapeutics that can rival biology’s exquisite capabilities. “I foresee a great potential to contribute to the growth of the bioeconomy via biotech startups and commercialization,” Mozhdehi says.