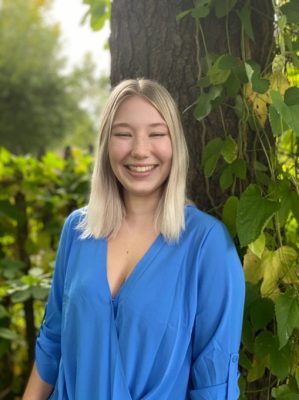 Women in Science and Engineering (WiSE) announced two STEM (science, technology, engineering and math) undergraduate researchers were recognized for their resilience, advancement and research excellence at the annual Slepecky Memorial Lecture and Ceremony. Laurel White, a physics major in the College of Arts and Sciences, received the first place award of the 2021 Norma Slepecky Undergraduate Research Prize.

White was nominated by her mentor Duncan Brown, Charles Brightman Endowed Professor of Physics, and unanimously selected given her outstanding work in the area of physics. The title of her reviewed honors thesis is “The Effect of Spin Priors on the Determination of the Neutron Star Equation of State Using Gravitational-Wave Signals.” This project focuses on challenges with the parameter estimation used to analyze gravitational-wave signals.

Brown notes that the work White has done has led to the significant discovery that it will be more difficult than previously thought to get an accurate measure of the equation of state with current second-generation detectors, due to the challenges of extracting the tidal deformability from the waveform and the impact of prior assumptions on the neutron star mass and spin distribution. It is expected that this research will lead to two articles before White’s graduation this year, adding to White’s list of publications. White was also previously selected as a 2020 Goldwater Scholar and a 2019 recipient of an Astronaut Scholarship, and will be joining the physics Ph.D. program at the Massachusetts Institute of Technology after graduation.

“I am very honored to receive the Slepecky Prize. Physics, like other STEM fields, is severely lacking in female participation, and mentorship has been cited as a critical tool for fixing the gender imbalance. I share Norma Slepecky’s belief in mentoring, and I have experienced firsthand how it can positively impact a young researcher,” White says. “I hope that I can leave the same legacy of serving as a role model and advocate for women in STEM.” 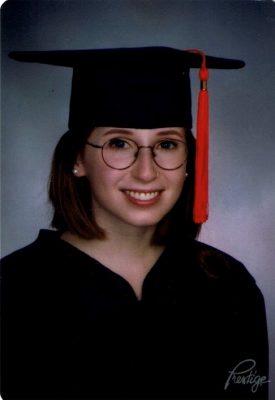 A second student was also recognized for her research. Aliza Willsey, a senior in aerospace engineering in the College of Engineering and Computer Science, received the second place Slepecky Prize. Willsey was nominated by Jeongmin Ahn, associate professor of mechanical and aerospace engineering. Willsey’s research explores the benefits and results of the mycelium membrane. Her work titled “Investigation of Mycelium Growth Network as a Thermal Transpiration Membrane for Thermal Transpiration Based Pumping and Power Generation,” for which she was the lead author, has been published in ASME conference proceedings.

“My experience with research has definitely been the most rewarding thing I’ve been able to take part in at Syracuse University,” Willsey says. “It is very meaningful to me to be able to carry on Norma Slepecky’s legacy and be awarded for my research as a woman in STEM. I think this prize is a great way to motivate young women to pursue a career in STEM and take on their own research projects.”

White and Willsey were both recognized during the annual Slepecky Memorial Lecture and Ceremony, which was sponsored by WiSE, the Humanities Center and the Department of Biology at Syracuse University. The annual ceremony featured Syracuse alumna Ahna Skop ’94, who gave the lecture “Took Creative for Science.” The lecture is available for viewing online.

The prize is given in honor of Norma Slepecky, who was a passionate professor, researcher and an advocate for undergraduate student research at Syracuse University. She also actively supported efforts to increase the number of women in science and engineering. Similar to Slepecky, WiSE programs support the persistence and excellence of women in science, technology, engineering and mathematics. The Slepecky Prize is meant to honor young scientists in STEM that have shown persistence toward degree completion, resilience, advancement and research excellence.