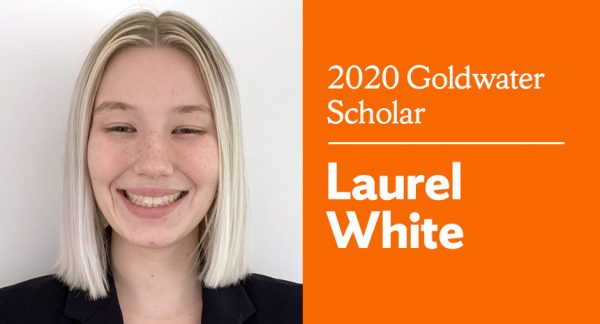 The Goldwater Foundation received 1,343 nominations this year from around the country and 396 scholars were named.

White worked with Center for Fellowship and Scholarship Advising (CFSA) to prepare her application. A faculty committee, headed by James Spencer, professor of chemistry, selected Syracuse’s nominees for the national competition. “Laurel emerged as an extremely strong candidate for the Goldwater Scholarship,” says Jolynn Parker, director of CFSA. “She became involved in physics research almost from the moment she stepped on campus as a first-year student, and she has built an extraordinary research profile since then.”

White has worked with the Gravitational Wave Group in Syracuse’s Department of Physics for the past three years under the mentorship of Peter Saulson, professor emeritus and the Martin A. Pomerantz ’37 Professor of Physics, and Duncan Brown, the Charles Brightman Endowed Professor of Physics. She works to analyze data in the effort to detect and interpret gravitational-wave signals from astrophysical objects like black holes and neutron stars.

“Laurel’s research has already had a significant impact on LIGO’s search for gravitational waves. With Professor Saulson and Derek Davis G’19, she co-authored a paper that helps us see black hole collisions further out into the universe,” says Brown. “Laurel is working on a project to explore the interiors of neutron stars, dense remnants of stars that pack one and a half times the mass of the sun into a ball only 10 or 12 miles across. Laurel shows great promise for the future and I am excited to be working with her.”

Last summer, White continued her research during a National Science Foundation research experience at the Laser Interferometer Gravitational-Wave Observatory (LIGO) Lab at the California Institute of Technology. “My project used machine learning to improve our understanding of the behavior of the LIGO detectors,” she says. “I conducted research full time and got a really good feel for what graduate school in physics will be like. It was incredibly rewarding to work with mentors who are highly respected in my field as well as driven students from around the world.”

White was also named a 2019 recipient of a prestigious Astronaut Scholarship. Through that scholarship, she is working with former astronaut Thomas Jones, a veteran of four space shuttle flights, who is advising her on academic and career choices.

She is continuing to perform her research in gravitational-wave parameter estimation from home this semester, as it is largely computer based. “I set aside some time each day between remote classes to work on my project, and my research group has weekly calls to check in,” she says. “This is also a great time to read literature from my field and learn more physics beyond what is taught in the classroom.”

After graduation from Syracuse, White plans to pursue a Ph.D. in physics/astrophysics and continue her research in gravitational waves. Her ultimate goal is to establish a career as a physicist at a research institute focused on astronomy and astrophysics.

“I want to improve software and computational tools used for space exploration projects so that I can help push the boundaries of what we know about space,” she says. “The Goldwater Scholarship has already connected me to a community of accomplished scholars and STEM professionals. I look forward to having their insight and support as I transition to grad school and a career as a researcher.”

CFSA seeks applicants for the Goldwater Scholarship each fall; the campus deadline is mid-November each year. Interested students should contact the CFSA at cfsa@syr.edu.