Fusion of Art and Science Leads to Discovery 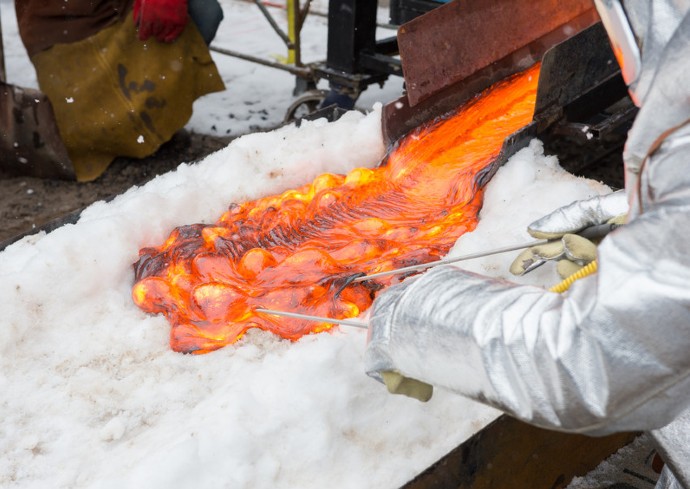 Lava pour at the Comstock Art Facility in early 2020.

Robert Wysocki arrived at Syracuse University in 2008, having made a name in the art world by capturing landscapes in three dimensions. Known for large sand sculptures showcased in galleries from Los Angeles to Florida, Wysocki’s inspiration began on a driving trip through Central Nevada, where he kept stopping the car to look at a large formation of sand dunes far in the distance, seemingly floating in a valley.

“I couldn’t capture them in photos. I wanted to be a landscape painter, but I’m not talented, so painting was out. My wife suggested that I make the landscape instead,” he says.

Newly arrived at Syracuse, Wysocki felt like he had mastered sand as a medium for creating landscapes. As an artist and art professor focused on sculpture, he knew how to work with foundries and had experience with aluminum, bronze and iron. He started thinking once again about landscape formation and wondered how to make lava. Doing what any inquisitive person does when initially faced with a question, he turned to Google.

“All I found was instructions on how to make lava lamps. So I spent two weeks researching how mineral wool—the raw material for lava—is made. All of the materials engineering papers I found online were in Russian, Chinese or Hindi,” says Wysocki, director of the School of Art and the Doris E. Klein Endowed Professor of Art in the College of Visual and Performing Arts. “Google translate wasn’t what it is today, so it was a fair amount of filling in the blanks. I knew what size rock and what temperature, I didn’t know what type of rock would work best to produce lava. That’s when I turned to the Earth Sciences department. I called Jeff Karson because he had five minutes to talk to me. We ended up talking for an hour. He was laughing the whole time, but he eventually figured out that I was serious.”

“Bob came to me and said, ‘Wouldn’t it be cool to make lava?’” says Karson, the Jesse Page Heroy Professor and chair of the Department of Earth and Environmental Sciences in the College of Arts and Sciences.

“I was skeptical, but it turned out that Bob knew a lot about geology and had thought a lot about how to simulate lava flows, so we just took it from there.”

Ten years and more than 2000 “pours”—simulated lava flows using a furnace, a crucible and molten rock—later, the pair are two of four collaborating authors of a recent paper in one of the world’s premier peer-reviewed science journals that demonstrates how planets made primarily of metal might form.

Believing in the process from the beginning, Wysocki and Karson never expected it to take this long for their work to be recognized as a scientifically valid—and artistically relevant—way to investigate lava formations and draw conclusions that inform our understanding of our own planet and others that exist within our range of observation.

Essentially, the Syracuse Lava Project bridges a gap in the traditional scales of observation for volcanologists and planetary scientists, notes Karson. “You can observe the properties of lava in a laboratory, but the scale is at a thimbleful at a time and you can’t observe some of the physical properties or interactions with surroundings. You can observe natural lava flows, but you are limited to working with the material nature provides in a dangerous setting,” he says.

“Thanks to this collaboration, we have created an experimental environment where we can control key variables like slope, temperature, viscosity and—at a moderate scale—how lava made up primarily of metal might behave.”

“Science is conservative,” says Wysocki. “Every volcanologist, physicist or planetary scientist who sees the project thinks it’s brilliant, but even though we can make the process consistent and reproducible, it was treated as a novelty.”

Karson adds, “We had this unique experimental program with an interesting niche—scientifically—between observing in a lab or during an active eruption. We eventually got grudging acceptance from the scientific community, but funding agencies really did not know what to do with us. The people in the lab didn’t see it as typical experimental work and the field volcanologists were skeptical that our findings could apply at a larger scale.”

Similarly, the art community isn’t really sure what to do with the project. “There’s an art to a lot of science,” says Wysocki, who has now observed lava for more hours than 90% of field volcanologists, based on the estimation of one geochemist involved with the project. “The impurities that float to the top, the lobes and petals that build up, crystal formations, these are all parts of the art of the lava pour that are relevant to the science.”

Now, with their latest paper and the help of a CUSE grant, this unlikely faculty duo and their collaborators have the data to submit a proposal to NASA for the planned mission to 16 Psyche, a 140-mile diameter giant metal asteroid in our solar system’s asteroid belt between Mars and Jupiter. 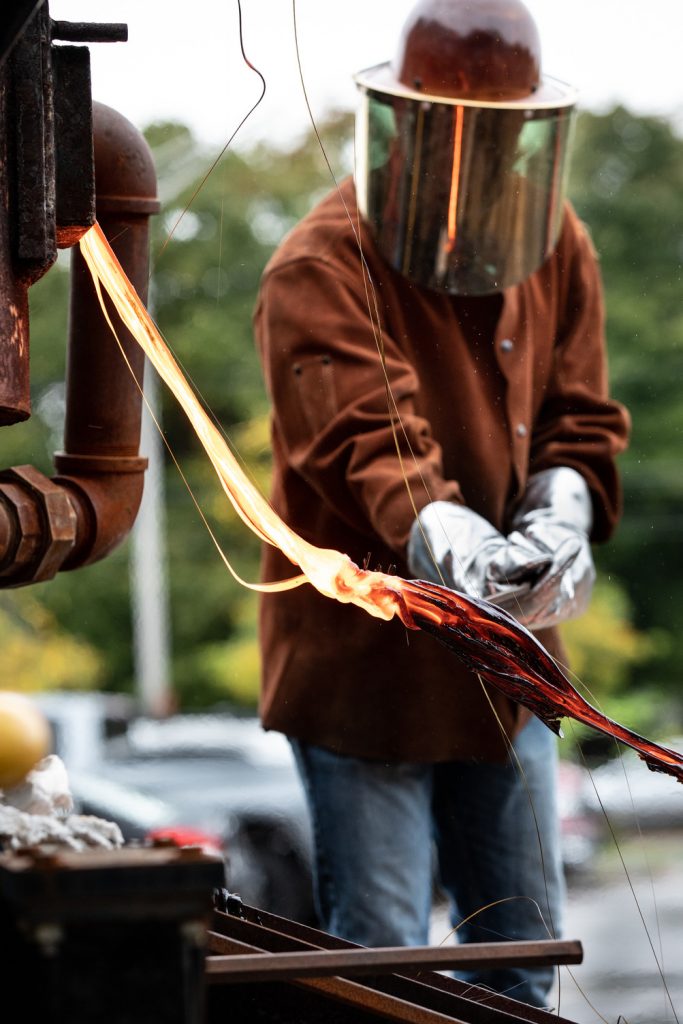 Having observed the lava creation process thousands of times, the dynamic partnership between art and science means that both Karson and Wysocki are possibly the world’s leading experts on the practical dynamics of lava experimentation, Karson in terms of measurement protocols and reproducibility of experiments and Wysocki in understanding the alchemy of temperature, materials and experimental conditions that helps him predict—he says 99% of the time—how a lava pour will behave.

Each credits the other as the key to the project’s persistence and success.

“Our academic backgrounds are completely different,” says Karson, “But without Bob, we never could have done this. He’s very inventive and a terrific lateral thinker. While lava flows are one of the faster geological phenomena, this project is really eye-opening in that you see geological processes, such as the transformation of lava to rock and crystal formation, happen right before your eyes.”

Wysocki credits Karson, whose primary research interest is planetary architecture and specifically the phenomenon of sea floor spreading, for his insight, saying, “We’ve had MacArthur genius grant recipients, celebrated volcanologists and geologists—lots of intelligent and accomplished people around the project. Yet, in my mind, I have always found Jeff to be the smartest person in the room regardless of the scientific focus.”

After ten years, their unexpected partnership is finally getting the recognition it deserves.