Zhen Ma arrived at Syracuse University in 2016, fresh from a postdoctoral fellowship at the University of California at Berkeley, to set up his own lab. Appointed assistant professor of biomedical and chemical engineering and the Carol and Samuel Nappi Research Scholar in the College of Engineering and Computer Science, he was attracted to the University by the growing core of faculty working on the intersection of materials and living systems. Now, his lab has attracted more than $2.7 million in prestigious grants from the National Science Foundation and the National Institutes of Health to develop a platform and system for testing how various drugs might affect a developing human embryo.

“At Berkeley I was working on a biomaterial-based platform for cell micropatterning—basically we lay down a pattern and human pluripotent stem cells will grow and differentiate as directed by that pattern. When you have a technology you ask, ‘What can we use it for?,’” says Ma.

Induced pluripotent stem cells, reprogrammed from adult human cells, have the potential to develop into any kind of cells in the human body based on biochemical signaling and cues from the physical environment. That’s where the new technology came in. 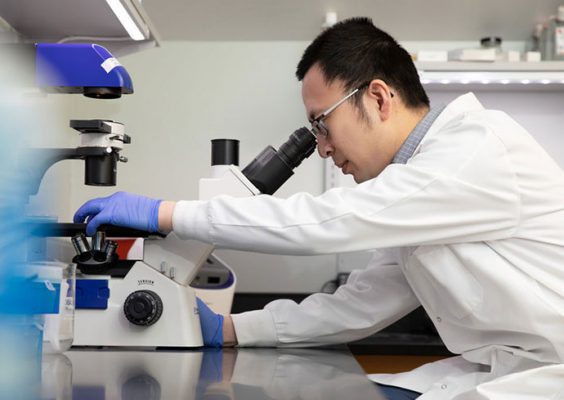 In talking to some of his physician colleagues at UC Berkeley, Ma learned that very little is known about how various drugs affect the development of a human embryo; there’s no way to test the effects ethically in a living system. That got him thinking about whether this biomaterial system could be used to understand how the heart forms in the earliest phases of development. One of the major applications of cell micropatterning and related biomaterial systems is to develop organoids—tiny, self-organized, three-dimensional tissue cultures that are derived from stem cells. These cultures can be crafted to mimic much of the complexity of an organ or to express selected aspects of that organ, such as producing only certain kinds of cells.

At Syracuse University, Ma set up his lab and got to work developing and refining a cardiac organoid model. Using both biochemical and biophysical cues, stem cells are “trained” beginning with a 600 micron diameter pattern that creates a circular colony of stem cells. They then grow and self-assemble in a 3-dimensional chamber. Knowing that changing the shape of that chamber changes the cues that tell the cells how to develop, Ma sought to mimic the developmental shapes of a human heart as they occur naturally during fetal development. “The first stage in the heart’s development is a linear tube of tissue, so we started there,” he says.

His proof of concept earned a prestigious National Science Foundation CAREER award of more than $400,000 over five years, to continue to develop what Ma calls “heart embryonic development on a chip.” He says, “The goal is to optimize the biochemical and biophysical cues in the system that allows us to create a consistent model over and over. We want to hold everything constant in these living tissue models so we’re confident that changes result from the outside variable we’re testing.”

Studying how drugs affect fetal heart development hasn’t been feasible in a living system until this technology was developed. As he is developing a consistent model, Ma is now moving forward with testing between 30-40 well-known drugs with the goal of developing a risk classification for medications that might be taken during pregnancy. His research has been boosted by a $2.3 million grant over five years from the National Institute of Children’s Health and Human Development (part of the National Institutes of Health) to evaluate the specific effects of how these drugs might disrupt the formation of the correct three-dimensional structures and the capabilities that cardiac tissue has for contracting and expanding.

“We’re really excited because this could provide a pioneering breakthrough in drug discovery, regulation, and safe prescribing during pregnancy,” Ma says. 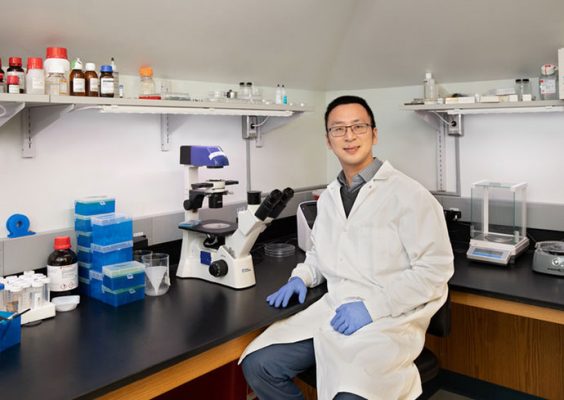 As a new father himself, Ma understands that doctors don’t really know whether a particular drug might hurt a developing fetus. There have been multiple studies of commonly prescribed drugs, such as antidepressants, on fetal health. Yet there are still many unanswered questions. This means that many women don’t have information they need to make decisions during pregnancy and forces difficult decisions as doctors try to balance risks while ensuring maternal and fetal health.

“It’s really exciting to begin work on the real practical application of this model,” says Plansky Hoang, who completed a Ph.D. at Syracuse University this past year and is now a postdoctoral fellow in the Ma Lab. “There’s the potential to really understand what goes wrong in fetal development that leads to birth defects–whether as the result of exposure to a drug or a genetic factor.” As a postdoctoral fellow, Hoang hopes to better understand how different cell types work in the model and whether it will be possible to model genetic diseases that give rise to congenital heart defects.

Ma’s lab has benefited from the development of the BioInspired Institute and the collaborations available across the University. He’s collaborating with Era Jain, assistant professor of biomedical and chemical engineering, on a project that was awarded one of BioInspired’s first six seed grants. Their goal is to create microgels, materials formed from a network of crosslinked polymers, that will enable them to develop a synthetic model of a blastocyst—one of the earliest structures formed in mammalian development. Because this is the point in development where human embryonic stem cells begin to differentiate, the ability to develop a synthetic model could have many uses in basic scientific research. The goal of BioInspired seed grants is to fast-track promising research ideas, funding proof of concept or preliminary studies allowing faculty to generate the data that will result in external funding.

“The more we can work on this technology, the more applications it may have,” says Ma. “Combining materials and living systems is opening doors to solving problems with applications we couldn’t have imagined just a decade ago.”