Russell Fearon ’20, G’21 (College of Engineering and Computer Science) and Ricardo Sanchez ’21 (College of Visual and Performing Arts) were the grand prize winners of Blackstone LaunchPad & Techstars at SU Libraries’ 2021 Syracuse University’s campus qualifier for the Atlantic Coast Conference (ACC) InVenture Prize. The event was held virtually on January 29. They earned a $5,000 cash prize, sponsored by M&T Bank, and will now move on to participate virtually in a PBS-televised event in April. The ACC InVenture finals feature a $30,000 prize package and will be hosted virtually by North Carolina State University. Fearon and Sanchez’ invention, SugEx, is an innovative device and mobile app designed to better monitor glucose levels for people with pre-, Type 1, and Type 2 diabetes. 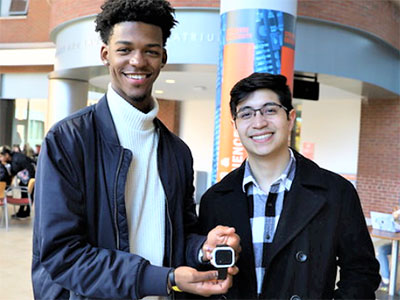 “We started in the Invent@SU accelerator as undergraduates and immediately began working with the tenacious team in the LaunchPad who incubate amazing entrepreneurs,” said Fearon, co-founder and CEO of SugEx. The SugEx team developed an initial prototype in the Invent@SU program for a wearable glucose monitoring device, based on Fearon’s own experience discovering he had diabetes while in college. They worked with the LaunchPad on a commercialization roadmap and along the way won a number of accolades, including a national health innovation award from the American Heart Association.

Fearon is now finishing his master’s degree in bioengineering and biomedical engineering after receiving his undergraduate degree in mechanical engineering. “I am grateful for our supporters at SU, the World of Money and the American Heart Association, who continue to believe in the innovation of the SugEx Watch,” he added. “As tough as the road seems, I am determined to pioneer change for the millions of people in the diabetes community.”

The SugEx team has now won more than $60,000 for the invention in various competitions. “The capital earned for SugEx is a testament to our hustle mentality. We will keep this momentum as we represent Syracuse University in the next round.”

Co-founder and CTO Ricardo Sanchez, a fifth year industrial and interaction design student, said, “I am extremely humbled and excited to have this opportunity to propel SugEx forward and represent Syracuse University. I want to thank Invent@SU and the LaunchPad, as well as my professors in the School of Design for believing in us. I’d especially like to thank Diana Miller and Dr. Louise Manfredi for their support and advice throughout my journey.”

The SU competition was hosted by the LaunchPad at SU Libraries and featured a slate of “Elite Eight” teams vying for the title of top campus innovator. Competing in the campus qualifier were:

This year’s campus judges brought a range of skills from industrial design to mechanical engineering, digital media and marketing, finance, investment and diversity and inclusion.

The ACC InVenture Prize Competition is the nations’ largest undergraduate student innovation competition. In addition to Syracuse University, teams from the 15 colleges and universities in the Atlantic Coast Conference (ACC) Academic Consortium will participate in the televised “shark tank” competition.

About the Blackstone LaunchPad & Techstars at Syracuse University Libraries

The Blackstone LaunchPad & Techstars at Syracuse University Libraries is the University’s innovation hub, connecting the entire campus resource-rich ecosystem with a global network that provides support for aspiring entrepreneurs, inventors, and creators. The program serves faculty, staff, students, and alumni across disciplines who are interested in innovation, invention, entrepreneurship, venture creation, careers, entrepreneurial skills, diversity, equity, inclusion, and taking ideas from concept to commercialization. The program supports a key pillar of Syracuse University’s Academic Strategic Plan to create an innovation ecosystem across the institution that prepares participants to be trailblazers in an entrepreneurial world.