National Science Foundation’s (NSF’s) Major Research Instrumentation (MRI) Program is one of the largest annual funding programs in the country. The highly competitive grant provides 70% of the budget for new experimental equipment. Universities share 30% of the cost and may only apply for two acquisitions and one development grant annually.

This year, both NSF MRI acquisition grants submitted by Syracuse University faculty members from the College of Engineering and Computer Science and the College of Arts and Sciences were funded.  In Engineering and Computer Sciences,  faculty members Teng Zeng, Jianshun Zhang and Charles Driscoll contributed to the successful grant.  In Arts and Sciences, faculty members Davoud Mozhdehi, Rachel Steinhardt, Tripti Bhattacharya and Christopher Junium were awarded funding. These grants will enable the University to purchase two new chromatography-mass spectrometers on campus. The equipment will allow researchers to analyze and study the composition of a larger compound by separating out its parts. This technology will contribute to a wide range of interdisciplinary study, ranging from global climate change to human tissue engineering.

If recent history is any indication, these instruments will have a tremendously positive impact for faculty and students in the years to come. Past NSF equipment grants have promoted research, student training and collaboration at Syracuse University and neighboring institutions.

Professors Dacheng Ren in the College of Engineering and Computer Science (ECS) and Duncan Brown in the College of Arts and Science (CAS) are two of previous PIs wining MRI in 2013 and 2010, respectively. In the decade since these awards, these advanced facilities improved the student experience and expanded the research capacity across the University, contributing to the innovation in bioscience and biomaterials, and discovery of pentaquarks and gravitational waves. 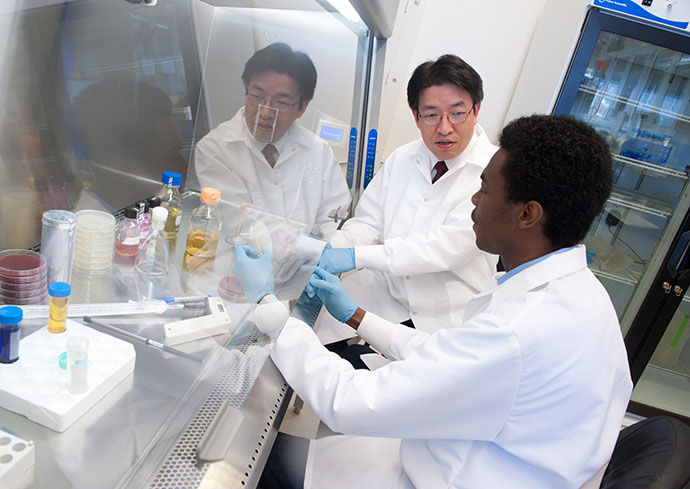 Today, Ren helps other faculty submit their own grant proposals for new equipment. He says keys for successful proposals are making a case new equipment will meet an unmet need in research, enable more collaboration, and improve student training. “It is a great funding mechanism if you can demonstrate a good plan.”

Ren, a Stevenson Endowed Professor in the Department of Biomedical and Chemical engineering is the Associate Dean for Research and Graduate Programs at ECS.  He primarily focuses on biomedical research investigating antifouling materials, medical device-associated infections, and novel biofilm inhibitors.

Ren’s grant financed a fluorescence-activated cell sorter. “Whenever you go to a hospital to do your annual physical blood work, they do the cell count and they come back with numbers of blood cells,” explains Ren. “It is actually the same concept, although the machine is not as sophisticated as ours.” Ren says work with cells, like biological experiments or engineering designs, researchers can draw insights by separating cells in a rather complicated mixed population. The cell sorter enables researchers to not only count cells, but also separate, collect, and study individual populations specifically. “There’s a lot of need for that,” says Ren. When Ren first arrived on campus 15 years ago, Syracuse University did not have such equipment. “It is necessary to have a cell sorter on campus to enable related research.” Ren was convinced to apply for funding that would not only make research on campus more readily reachable but also enhance student training. Ren received the grant from NSF in 2013 with his co-PIs, some are still at Syracuse including Pranav Soman (ECS) and Katharine Lewis (CAS). Users’ research ranges from biochemical and physical processes and controlling cell functions to the development of new technologies for biomedical applications. Now this cell sorter is a core facility benefiting researchers from Syracuse University and the SUNY College of Environmental Science and Forestry and Upstate Medical University. “I think it’s a kind of enabling resource that can serve a broader community,” says Ren.

Besides research, the sorter has been shown to numerous visitors and used to promote student learning. For example, Ren has used the cell sorter to teach sophomores and juniors in his engineering classes. “We’re not unique, but it’s not very common to have such resource available for classes.” Ren says most cohorts benefit from using this rather expensive equipment. “It certainly helps a student to broaden their horizons to see the power of advanced technologies and career opportunities.” 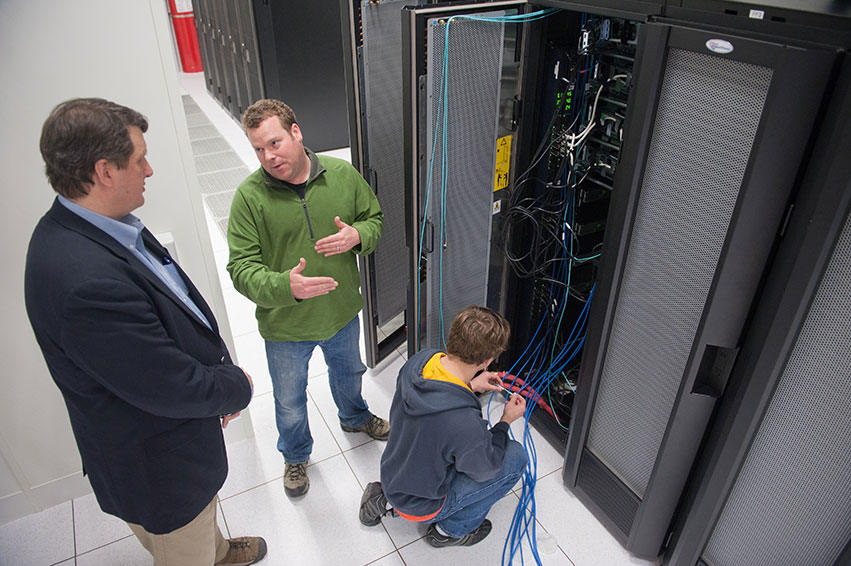 Similarly, the grant that Duncan Brown, Charles Brightman Endowed Professor of Physics, received helped fill a gap in the research infrastructure on campus. In 2010, Syracuse University did not have a significant amount of large-scale campus computing and Brown’s field, gravitational wave astronomy, requires it. He initially built and operated a computer cluster of 300 cores and used the preliminary results to demonstrate to the NSF that researchers on campus could successfully operate a cluster. The proposal for the NSF grant was joined by the high-energy physics group, another big user of research computing on campus.

The NSF Grant supported the design, construction, and commissioning of a high-throughput computing cluster in the Syracuse University Green Data Center. PhD candidates, graduate and undergraduate students in the Syracuse gravitational-wave and high-energy physics groups over the years have been involved in the instrument development and the research that this award enabled. They gained valuable training in cutting-edge computational skills. In 2016, Samantha Usman ’16 wrote her thesis on the analysis pipeline the LIGO Scientific Collaboration used to detect the first gravitational-wave signal The High-Energy physics group used the cluster to contribute discovery of the pentaquark in 2019.

While the original equipment purchased by the NSF grant have been since decommissioned, their impact is still felt. “That cluster really let us step up our game and be a big player in computing. And not only led to Syracuse University being a major player in a lot of the gravitational wave discoveries, but also really establishing the research computing effort that Syracuse University’s Information Technology Services is now leading,” says Brown. Both faculty and student users from all over campus have benefited from the increased computing capacity. “Having our own cluster allows us to have an undergrad just throw that code at the cluster and see what happens,” says Brown. Undergraduates can experiment. Rather than spending weeks optimizing an algorithm, students are encouraged to get results through trial and error, says Brown. He has also used the computer clusters in his computational physics class, and nine undergraduate students have written theses or published papers. “It has been a real boon for both the undergraduate and graduate students having this type of local resource.”

Syracuse University’s growing success with NSF equipment grants is a demonstration of University’s commitment to research excellence and student success. Over the past decade, SU has been awarded $4.4 M MRI funds from NSF and provided $1.9M cost share. “We’re all in one institution, and the equipment grants act as catalysts for discovery,” says Ren. “They bring many positive impacts on research and teaching; some are far beyond what can be measured by dollars.”