The familiar saying goes, “The whole is greater than the sum of its parts.” But for scientists, understanding those smaller parts is critical to scientific discovery.

A method known as chromatography-mass spectrometry lets researchers analyze and study the composition of a larger compound by separating out its parts. One common application is quality control in the food industry, where researchers separate and analyze additives, vitamins, preservatives and proteins.

In the College of Arts and Sciences, two new chromatography-mass spectrometers will also be used to address two separate yet important questions:

The acquisition of each spectrometer was made possible thanks to grants from the National Science Foundation’s (NSF’s) Major Research Instrumentation (MRI) Program. One of the apparatuses has been awarded to the Department of Earth and Environmental Sciences (EES).

Thanks to a proposal led by faculty from the College of Engineering and Computer Science, including Assistant Professor Teng Zeng, Professor Jianshun Zhang and University Professor of Environmental Systems and Distinguished Professor Charles Driscoll, A&S chemists Davoud Mozhdehi and Rachel Steinhardt, both assistant professors, will also have access to the second apparatus which will be installed in Link Hall.

Both new devices will allow scientists to explore new areas of research never before possible within their laboratories.

According to Alan Middleton, associate dean of research and scholarship in A&S, the two highly competitive MRI grants awarded to the University in the same year is a milestone achievement. 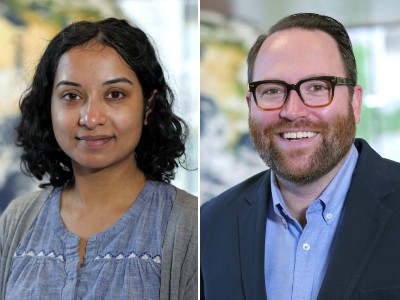 “We are excited by the success of our faculty in recruiting the funding for these new instruments for analysis,” says Middleton. “Mass spectrometers are central to work across the sciences and engineering and they are in high demand by our researchers. Our scientists and students will put these to work right away for research and training, while strengthening interdisciplinary connections between departments and colleges.”

The Proof is in the Sediment

One tool that scientists can use to reconstruct Earth’s ancient climates is the analysis of lipids, which are organic molecules found in living things. Lipids from ancient sediment contain varying amounts of hydrogen, carbon and nitrogen. By determining the isotopic ratio and atomic weight of these elements, researchers can identify levels of rainfall during a particular period of the past. To perform this analysis in a range of organic materials from waxes to amino acids, EES researchers will use the new gas chromatograph coupled to an isotope-ratio mass spectrometer (GC-IRMS).

The process begins by removing lipids from an organic material using what Bhattacharya refers to as an “espresso machine” for dirt. Researchers then inject the lipids at high temperatures into an oven and separate them out by their mass using a gas chromatograph. The lipids are passed to a reactor that converts them into a gas and the isotope-ratio mass spectrometer separates out the isotopes according to their mass.

Different isotopic ratios can tell researchers information about aspects of past environmental conditions. For instance, carbon isotopic ratios in ancient lipid compounds can illustrate ancient shifts in the extent of forest compared to grassland, and hydrogen isotopes can reveal how arid or wet these ancient climates were.

“I’m particularly excited about this because my lab measures ancient plant lipids. Their hydrogen isotopic ratio can tell us about past aridity, because the hydrogen in these plant lipids ultimately comes from environmental water like rainfall,” says Bhattacharya. “I’ve used similar analyses in the past to quantify changes in monsoon rainfall over long timescales from thousands to millions of years in the past. Having an instrument in-house will increase our research productivity and provide really unique training opportunities for graduate and undergraduate students.”

For Junium, the new instrumentation will allow him and his students to perform nitrogen isotope analyses on amino acids from modern and ancient biomaterials ranging from fossil clams to modern marine mammals.

“These types of analyses will help us understand how food energy is transferred from one organism to another,” says Junium. “We will explore how a community of modern or fossil organisms like whales or clams acquired their food, and diagnose whether organisms shift their feeding habits in response to environmental changes.”

The device will be housed on the third floor of the Heroy Geology Laboratory in Bhattacharya’s and Junium’s shared lab facilities.

To maintain healthy tissue, the human body depends on a protein called collagen. If just one or two oxygen or hydrogen atoms are missing from that protein, the collagen can weaken and fall apart. The resulting effects are fatigue, muscle weakness, fever, body aches and joint pain. 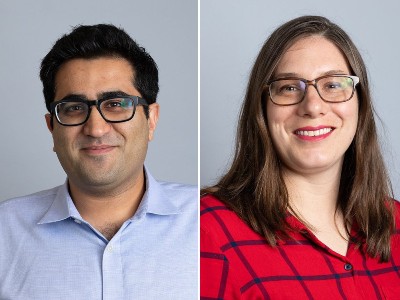 A&S chemists are working to create a new type of modified protein that could lead to stronger tissue, helping to build up muscle and prevent the breakup of collagen. But to produce a viable protein-based material, researchers must ensure they have the correct number of atoms in the protein for it to function properly. Thanks to the new liquid chromatograph high resolution mass spectrometer, acquired through an MRI award, researchers can confirm whether or not they have added or subtracted the correct atoms as they design new complex proteins.

“These modifications are important because despite their small size, they can significantly change the properties of protein materials,” says Davoud Mozhdehi, assistant professor of chemistry. “Before this device, we did not have the ability to check and find these modifications. This instrument has a much higher resolution so we can now locate small changes with ease, which will help us develop these new proteins quickly.”

He says this device will play an immediate role in the department’s efforts to produce protein-based materials for tissue engineering and create new renewable materials like eco-friendly and biodegradable fabric.

The MRI Program not only increases access to scientific and engineering instrumentation for research, but also enhances research training for students by making these devices available to college campuses. Each new device will also be utilized during summer internship opportunities for underserved K-12 and community college students, providing direct exposure to future career pathways in STEM fields.