Amy Criss, associate professor in the Department of Psychology in the College of Arts and Sciences, has recently received two awards for her research. 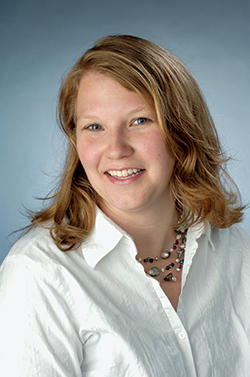 The first award comes from the Federation of Associations in Behavioral and Brain Sciences (FABBS), which named Criss one of three Early Career Impact Award winners. These awards are given to scientists from one of FABBS’ member societies in their first 10 years post-Ph.D. who have made major contributions to the sciences of mind, brain and behavior. Criss was nominated by the Society of Mathematical Psychology for her work developing a comprehensive and precise model of memory.

Criss was also chosen to receive the Psychological and Brain Sciences Outstanding Young Alumni Award from her alma mater, Indiana University (IU). This award also honors her work in the area of memory, specifically “the study of computational approaches to memory and semantic knowledge,” according to William Hetrick, chair of IU’s Department of Psychological and Brain Sciences.

“I am delighted that Amy’s research has received such strong endorsement and recognition from her peers and leaders in the field of cognitive science,” says Peter Vanable, professor and chair in the Department of Psychology. “Receipt of two distinguished early career awards in the span of less than a year is a testament to the impact of her research and her growing prominence in the field.”

Criss’ work lays the groundwork for a unified, mechanistic account of memory by combining behavioral measures, cognitive neuroscience, and mathematical modeling. Her research is funded by an NSF CAREER Award.

The most prominent area of her research is the programmatic investigation of the principle of differentiation which holds that the more you learn about something, the more it becomes different from other things. This line of work aims to systematically assess the empirical validity of the theoretical principle of differentiation and its viability as a mechanism underlying memory. Criss’ extensive body of work on differentiation in memory has gained particular attention as an alternative to the classic theoretical account.

She joined the University in 2007 as an assistant professor in the psychology department, advancing to associate professor in 2013.

Criss received a dual Ph.D. from Indiana University in cognitive psychology and cognitive science with a certificate in mathematical modeling. She received her bachelor’s degree in psychology and neuroscience from Miami University. From 2004-2007, she was a postdoctoral fellow at the Center for the Neural Basis of Cognition at Carnegie Mellon University.