When Amy Rabideau ’10 started working at Moderna in 2015, she never imagined that she would someday help fight one of the world’s deadliest viruses.

Fresh out of the Massachusetts Institute of Technology, where she had received a Ph.D. in biological chemistry, Rabideau began working at the pharmaceutical and biotechnology company that has since become a household name. Her passion for biochemical research traces back to her undergraduate majors in chemistry and biology in the College of Arts and Sciences (A&S).

As a first-year student in the Renée Crown University Honors Program, an Introduction to Chemistry class with Professor Robert Doyle sparked her interest in the biochemical field. She then approached Doyle requesting to join his lab as a researcher—a decision that would ultimately influence her career trajectory. 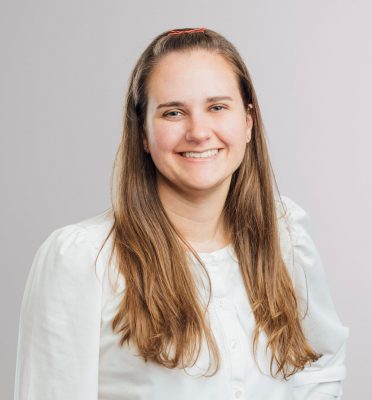 “I had the chance to contribute to some really important publications in the field, and it ultimately set me up to go to graduate school, do more research and be successful there,” says Rabideau.

In the Beginning: mRNA Vaccines

When Rabideau joined Moderna as an entry-level scientist, it was in the preclinical phase of messenger RNA (mRNA) drug development. That meant no vaccines had yet progressed to human trials.

mRNA vaccines teach cells how to make a protein that triggers an immune response. The immune response creates antibodies to protect the body from viruses. While some of Moderna’s early mRNA vaccines helped fight viruses like flu, their subsequent versions paved the way for the eventual vaccine against the coronavirus in 2020.

Rabideau was eventually promoted to lead Moderna’s early-phase mRNA process development team. She is now technical lead for early development, where she oversees strategy for new programs in the Moderna pipeline. “I don’t think I could have predicted my path over the last seven years at Moderna,” she says. “When the pandemic came, I dove in just like everyone else here at Moderna. It was so important for us to do our part.”

Rabideau has mentored junior staff throughout her tenure. She is also part of A&S’ alumni connections program. Offered by the A&S | Maxwell School Department of Undergraduate Academic and Career Advising, this networking/mentoring program introduces students to career options in different industries before they graduate.

According to Matt Wheeler, associate director of alumni relations, the program attracted nearly 800 alumni mentors and over 500 students completing over 800 mentoring conversations since 2020.

“Our alumni have an incredible wealth of knowledge to share with students,” says Wheeler. “Mentors commonly go above and beyond, as Amy has, to support students with internships and jobs as well.”

For Rabideau, having the chance to talk with young scientists looking to get into the industry offered a way to open doors to opportunities for scientists beyond teaching and research.

“It’s something I had to explore myself through different research experiences,” says Rabideau. “If students have that connection early, they have a better sense of where they want to go.”

Realistic View, Down to the Instruments 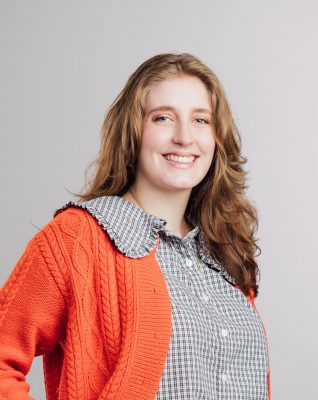 Rabideau was matched with Alexis Eckhart ’22, who double majored in chemistry and forensic science. Like Rabideau, Eckhart utilized undergraduate research opportunities, working in a biochemistry research lab with chemistry Professor Olga Makhlynets. Being a part of hands-on research related to health motivated her to look more into professional opportunities in the biotechnology field after college. “Amy really gave me some great career advice as I was looking to get into the workforce,” says Eckhart. “Because of the pandemic, there weren’t as many internships available, and I wanted to know what I was doing after graduation.”

Eckhart applied for numerous biotech jobs at several other companies. Thanks to her connection to Rabideau through the alumni match program, she investigated positions at Moderna that fit her interests. She interviewed and was soon offered a job on their Analytical Science and Technology team.

“Amy’s perspective was something that I valued,” says Eckhart. “The alumni match experience provided a realistic view of working in the biotechnology industry, down to the instruments. It also helped me understand how to network properly. I now plan to participate in the alumni match program as a mentor because it was helpful to me.”

Both Rabideau and Eckhart are continuing to be part of medical breakthroughs at Moderna, working on vaccines against infectious disease targets.

“I think it’s so meaningful as a scientist to do work that has an impact,” says Rabideau. “Helping to deliver new vaccines exemplifies how research can help people, and it feels great to be a part of that.”

If you are interested in participating in the alumni connections program as student mentee, complete the online registration form on the Career Explorations page.