Mechanical and Aerospace Engineering Professor Quinn Qiao and a research team from the College of Engineering and Computer Science recently published two papers in Advanced Materials, collaborations with Peking University and other universities in Europe. Both papers focus on the organic solar cell (OSC), which is a photovoltaic device that converts solar energy to electrical energy. 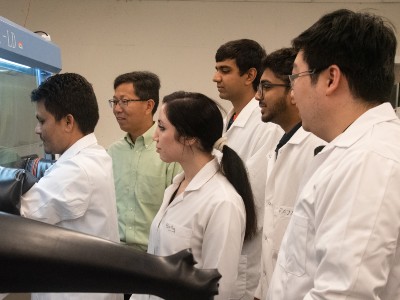 The research was conducted at Qiao’s solar cell lab in Link Hall. An atomic force microscopy (AFM) was mainly used in the research to measure the current sensing AFM (C-AFM) data and an oscilloscope was used to obtain charge carrier dynamics data. The group has applied a patent for the measurement and has published many papers based on the technique in recent years.