“What can physics offer biology?” This was how Alison Patteson, assistant professor in the College of Arts and Sciences’ physics department and a faculty member in the BioInspired Institute, began the explanation of why her physics lab was studying bacteria. 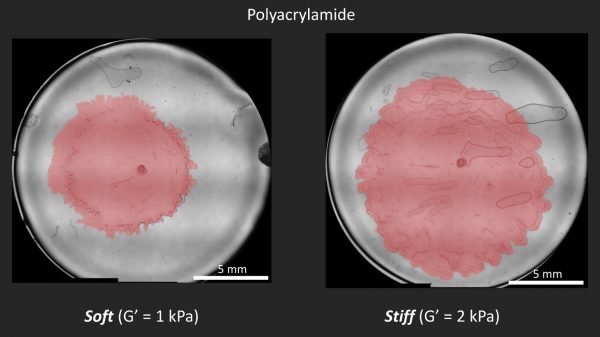 In a paper published by PNAS Nexus, a new journal from Oxford Academic, Patteson and graduate student Merrill Asp, along with the collaboration of Professor Roy Welch of the biology department, describe the surprising findings from their recent work with bacterial colonies that has potential to help shape further understanding of all living systems and improve outcomes in medicine and health.

Patteson and her team wanted to investigate what makes a biofilm—or a colony of microorganisms that bond together—grow and flourish on some kinds of surfaces but not others.

In the past, scientists investigating this question typically grew the colonies on gels made from agar, an extract of red algae. “It’s a substance popular in culinary applications because it makes things gelatinous and adds texture,” says Patteson. “We call it a complex material because it is a solid but has properties like a fluid.” This mixture of properties, she explains, means that teasing out exactly which aspects make the bacteria behave a certain way more difficult. “Are they sensing the solid part or the fluid part?” she says.

Instead, Patteson’s team synthesized transparent gel substrates that could be tuned to a specific stiffness, that would allow them to take time-lapse videos of bacterial colonies growing on them. “We’re able to probe how much deformation the gel undergoes under a certain amount of strain,” says Patteson.

“One of the things we found is that when a biofilm grows out, it’s actually strong enough to exert force on the substrate,” Patteson continues. “We typically think of biofilms as really slow-growing things, but if they’re on something soft, they can actually disrupt it.” This has implications for disease; it means that tissue damage during and following infection might not just be caused by reactions of the body’s immune system, but from the bacteria exerting strain on it.

The left image depicts how each small part of the hydrogel moved based on the movement of embedded fluorescent beads. To the right, a mathematical model of an elastic solid is used to calculate the stress exerted by the bacteria.

Besides design and manipulation of the gels, Patteson and Asp apply physics to biology in the ways that they process the images, measure the boundaries of the biofilms, and calculate how quickly the boundaries expand. “We study mechanics and soft matter systems, so we have equations that describe how something deforms under certain amounts of stress,” says Patteson. Unlike with the less controllable agar, Patteson’s team can now make calculations to measure the forces that the biofilms are putting on the gels. Indeed, by mapping the stress, the team was able to show how biofilms exert more pressure on a stiff surface than on a softer one. “It makes sense, in a way,” says Patteson, “if you tried to climb a sticky wall instead of a slippery wall, you could exert more force on it. We don’t exactly know why in the case of the biofilms, but it makes sense that they’re able to exert more force and move faster.”

“Bacterial organisms, by biomass, are the most predominant life form on the earth,” says Patteson, acknowledging this overlap in interest with Welch, from whose lab they procured the strains of bacteria. “We’re motivated to study them because they intersect with the human world,” says Asp. “Biofilms will grow and be very sturdy, sometimes in places that we don’t want them, whether that’s in patients with disease that are immunocompromised, or in water treatment plants, or on the hulls of ships.”

It’s easy to sense the team’s respect for these microscopic organisms as they speak—indeed, Patteson suggests that they might hold a key to understanding much more about organisms big and small. “We spent 10, 20 years sequencing the human genome, but that’s not enough for us to understand how the body works,” she says. “Just because we know the genome, we still can’t predict how things will behave. This is where soft matter and physics can enter in. And there are a lot of tools for understanding that we have just begun to utilize.”