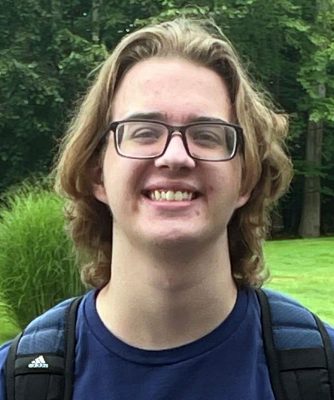 Junior Connor Ritchie has won the Department of Mathematics’ inaugural Erdős Prize for being Syracuse University’s top finisher in the William Lowell Putnam Mathematical Competition. The Putnam contest is the preeminent mathematics competition for undergraduate college students in the United States and Canada, and is organized by the Mathematical Association of America (MAA). Ritchie, who is a mathematics major in the College of Arts and Sciences (A&S) and music composition major in the College of Visual and Performing Arts, finished in the top 500 out of nearly 3,000 students who took part from 427 institutions. Ritchie’s placement in the top 20% improved upon his finish in the top 30% in 2019.

Ritchie was among a Syracuse team of four, which also included Yuming Jiang (mathematics and physics major in A&S), Anthony Mazzacane (mathematics major in A&S and computer science major in the College of Engineering and Computer Science [ECS]), and Michael Perry (mathematics major in A&S and computer science major in ECS). The test, given in December, consisted of 12 challenging mathematical problems covering a range of topics, from geometry and calculus to number theory and abstract algebra. According to Leonid Kovalev, professor and associate chair of mathematics who also serves as the team’s coach, success in the contest depends not only on prior mathematical knowledge but also on creative thinking and proof-writing skill.

To help the team prepare, Kovalev held several practice sessions during the Fall 2021 semester. He sent prospective students a list of problems and then met with the group to discuss them in-person. “We found that problem-solving sessions work better in person than on Zoom,” he says. “The training sessions and the competition itself develop problem-solving abilities that propel students to success beyond their undergraduate career and increase the chance of admission to competitive graduate programs.”

For Ritchie, the rigorous training was worth it as it prepared him for his best finish in the elite competition. He says working on problems leading up to the test and learning new techniques and tricks to solve new types of equations was essential to his success. “It was so satisfying to see a hard problem, struggle with it for a while, and finally solve it after a lot of effort,” says Ritchie. “That was made possible thanks to our extensive preparation beforehand.” 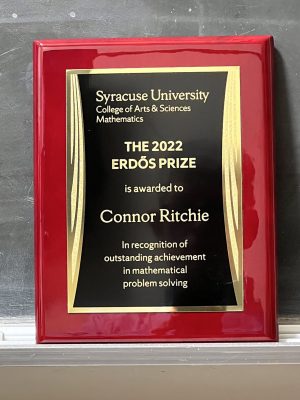 As the Syracuse team’s top finisher, Ritchie was awarded the inaugural Erdős prize by the department in April. The Department of Mathematics established the prize as a way to recognize excellence in mathematical problem-solving among Syracuse undergraduates. The award is named after Paul Erdős (1913-1996), a Hungarian mathematician with ties to Syracuse noted for posing and solving numerous mathematical problems. He would famously offer cash prizes for hundreds of the problems he postured.

“In the mid-1940s Erdős spent a couple of years at Syracuse University,” says Kovalev. “His obituary published by the MAA noted that in that decade he embarked on his life as a wandering scholar with the University of Pennsylvania, Notre Dame, Purdue, Stanford University and Syracuse as some of the major stops.”

Ritchie plans to eventually attend graduate school and major in mathematics, music composition, or perhaps both. He says studying each of those subjects as an undergraduate has allowed him the unique opportunity to explore the intersections of music and math.

“One of the major differences I’ve noticed between the two is that math is completely deterministic while music is completely unpredictable,” says Ritchie. “Once you have a math result that’s been proven correct, it’s always correct, no matter what kind of weird edge cases you find to test it with. In musical composition there is no theory that explains the precise logic behind every single piece of music already written, and more importantly, there is no theory that describes the precise logic of every future successful piece of music that will be written.”

In a perfect world, Ritchie would like to one day find a job that combines his passion for mathematics and music composition, but says dual majoring in those subjects has allowed him to keep his options open.

Read more about the Putnam Competition.