As temperatures and carbon dioxide (CO2) levels on Earth continue to increase in response to rising greenhouse gas emissions, researchers are looking to a mystery millions of years in the past to answer questions about what our climate may look like in the future. Their findings show how changes in the Arctic driven by climate change can have an impact as far away as the tropics.

A team of international researchers, including first author Ran Feng, professor in the University of Connecticut’s Department of Geosciences, and second-author Tripti Bhattacharya, Thonis Family Professor of Earth and Environmental Sciences (EES) at Syracuse University, has been exploring an over 3-million-year paradox from the Pliocene Epoch to help determine the long-term effects of global warming. 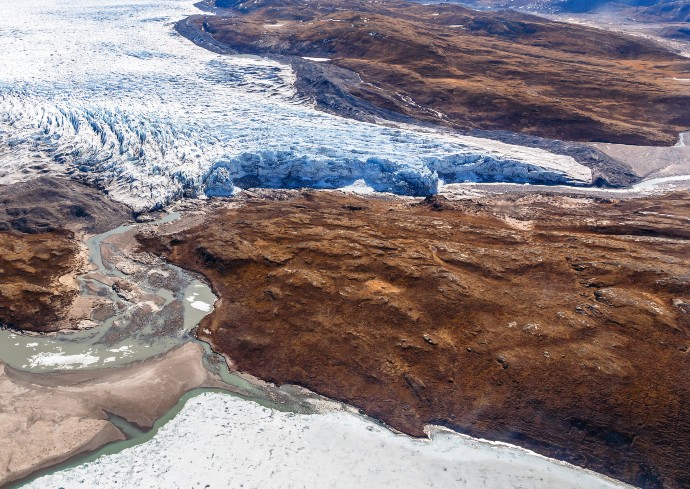 Aerial view of a retreating glacier near Kangerlussuaq, Greenland. According to NASA, five trillion tons of ice have melted in Greenland over approximately the past 15 years, enough to increase global sea level by nearly an inch. (Photo by Vadim Nefedoff)

The team zeroed in on the climate during the Pliocene, which was the last time Earth has seen CO2 concentrations above 400 parts per million. While researchers would usually expect higher atmospheric CO2 to result in higher global temperatures, and in turn, drier subtropical regions, this surprisingly wasn’t the case. Geologic evidence suggested that this interval featured wetter and greener conditions in today’s dry areas like the Sahel region of Africa and Northern China.

The research team wanted to know the root cause of this apparent discrepancy and determine if there are processes that can account for wetter Pliocene subtropics. The results of their study were recently published in Nature Communications.

The team used proxy data, which are measurements from natural recorders of past climate variability gathered from sources like sediment, ice cores and tree rings, as well as a suite of model simulations of the Pliocene to identify the factors responsible for subtropical rainfall changes. 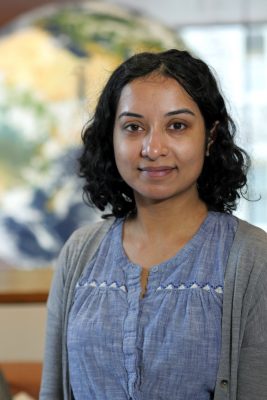 “Our study focused on Eurasia and North Africa, and we looked at whether the latest, state-of-the-art climate models could actually capture a pattern of hydroclimate that was consistent with available geologic evidence of wet conditions,” says Bhattacharya. To their surprise, the researchers found that current generation models perform well at simulating wet conditions on Pliocene subtropical continents, but only when interactions between ice sheets, vegetation and the atmosphere were included in models.

The team concluded that the key reason for wetter conditions over those regions was vegetation and ice sheet changes in the Pliocene, which created high latitude (Arctic) warming and a circulation pattern that allowed much more moisture to converge over the continents, intensifying the summer monsoon circulation. “The main takeaway is that including the interaction of ice, vegetation and the atmosphere is key to accurately simulating Pliocene hydroclimate,” Bhattacharya says.

These long-term adjustments of ice (the cryosphere) and the biosphere to higher greenhouse gases are key components of what climate scientists call Earth system feedbacks. Previous work has shown that these Earth system feedbacks can amplify warming in response to CO2 over long time scales, and Bhattacharya says this study demonstrates that these feedbacks also have an important impact on the hydrological cycle.

Bhattacharya notes that the results are an important indicator that what happens at high latitudes does not stay there. “There are consequences of Arctic climate change as far away as monsoon regions in the tropics and subtropics,” she says. “If we continue to warm the planet, raising greenhouse gases, over the long-term we are likely to see unanticipated changes as far away as the tropics.”

Feng explains that this work is providing a new perspective: when studying hydrological cycle responses to CO2 changes, it is important to consider long-term changes in terrestrial conditions like the shifting range of ice sheets and biomes (areas with distinct assemblies of plants and animals such as tropical forests, grasslands and boreal forests).

“Continental greening and ice sheet retreat have profound impacts on the surface temperature through lowering the surface albedo—the ability of the Earth’s surface to reflect sunlight back to space—and a profound effect on the hydrological cycle allowing for greater evaporation and altering paths of moisture transport. In the long run, there’s a much bigger change in the hydrological cycle, compared to what we are anticipating today,” says Feng.

The researchers say this is a cause for concern because changes in the hydrological cycle will mean places that are already receiving excessive amounts of summer rainfall such as Southeastern Asia, Northern India and West Africa, are going to see even more summer rainfall as continental greening increases and the ice sheets continue to recede.

“For us as a species, we need to have long-term plans, beyond the next several decades,” says Feng. “By looking back to past climates and learning what the world was like, we can better prepare for the future of our society.”

This work was funded by the National Science Foundation.