For the first few weeks of Invent@SU, physics major Paul Franco ’22, aerospace engineering student Zach Stahl ’23 and computer science student Anthony Mazzacane ’24 were not always sure their concept would work out. They had identified a clear problem – 80% of NCAA athletes had suffered from dehydration but finding a solution was not simple. They wanted to design a wearable device that could monitor an athlete’s hydration level so coaches and trainers would have better information and keep athletes safe, but would also need to prove their invention worked.

“We knew the scientific principle worked, but in the first few weeks we had logistical problems with the prototype,” says Franco.

As they pushed forward, they leveraged their different skill sets to solve problems with sensors, data collection and a prototype model.

“Being interdisciplinary forces you out of your comfort zone in a really good way,” says Mazzacane. 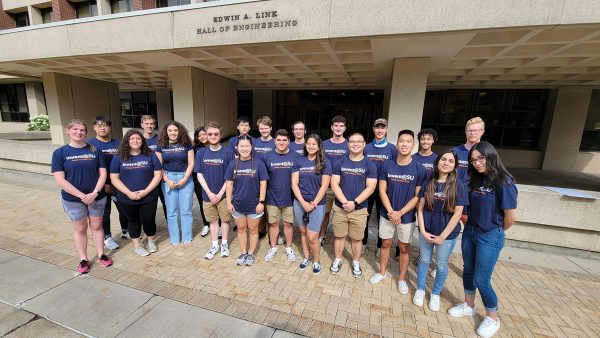 Students who participated in Invent@SU 2021

“Sweatration” was one of seven interdisciplinary teams of undergraduate inventors competing in the six week Invent@SU program. Before the first week of the program, faculty help form three-person interdisciplinary teams that balance different skill sets. Each team comes up with a concept for an original invention, research existing patents to make sure their idea is unique, develop a prototype and pitch it to weekly guest evaluators before “Shark Tank” style final judging at the end of week six.

The Sweatration team was concerned that initial evaluators were skeptical and knew they needed to back up their idea with hard data. They also met with a Syracuse University athletic trainer to gain their input.

“After every time we pitched, I wanted as much feedback as we could get,” says Franco.

The trainer was very supportive of the idea and didn’t believe there was anything like it that existed currently. As their pitch improved, the technical challenges were also being overcome. During a week five test of their prototype at the Barnes Center, the team saw it was collecting meaningful data and their prototype could reliably show when the wearer was getting dehydrated.

“We had improved the prototype for a better fit and better connections for the technology inside,” says Stahl. “When I saw it was delivering data and consistently indicating dehydration I was thrilled.”

The notable alumni, entrepreneurs and innovators who served as final judges awarded the Sweatration first place and a $7500 prize. They plan on continuing with their invention and will work with both the Blackstone Launchpad in Bird Library and the Innovation Law Center as they move forward.

Second place at Invent@SU went to Ambiflux – a device that can both monitor asthma conditions and deliver medication.

“It felt good that we were rewarded for all the time and energy we put into this,” says bioengineering and neuroscience major Victoria Hathaway ’22. “It is an important device that is needed for a real cause.”

“To see that the judges saw what we saw, it was very gratifying,” says computer engineering student Aidan Mickleburgh ’23. Mickleburgh is also in the H. John Reilly Dual Engineering/ MBA program.

“It felt nice they appreciated the way all the concepts and elements came together,” says chemical engineering student Trinity Coates ’24.

The third place went to Sense-A, a monitoring and alert device that can help people caring for a family member with Alzheimer’s disease.

“It was a great experience, different from anything else I have done in college,” says computer science student Hong Yang Chen ’22. “Building a physical prototype was a great challenge.”

“We are definitely going to move forward with this and work with Blackstone Launchpad,” says biomedical engineering student Gabriela Angel ’21 G’22.

Honorable mention at Invent@SU went to Glisten. They designed a device aimed at helping people monitor their dental health at home and provide pre-diagnostic information to a dentist.

“To be able to research, design and build a functioning prototype in six weeks is intense, but the expertise of the faculty and the evaluators made it possible,” says bioengineering student Bianca Andrada ’22.

“Our team was a good balance of different skills and perspectives,” says industrial and interaction design major Ahn Dao ’23.

“We have a passion to keep the world smiling,” says biology student Justin Monaco ’21 G’22.