The 104th Chancellor’s Review Award Ceremony will be streamed live at 2:30 p.m. April 23. The review is an annual tradition that showcases Army and Air Force Reserve Officer Training Corps (ROTC) cadets from Syracuse University and its partner schools conducting drill and ceremony exercises and receiving academic and leadership awards and honors. 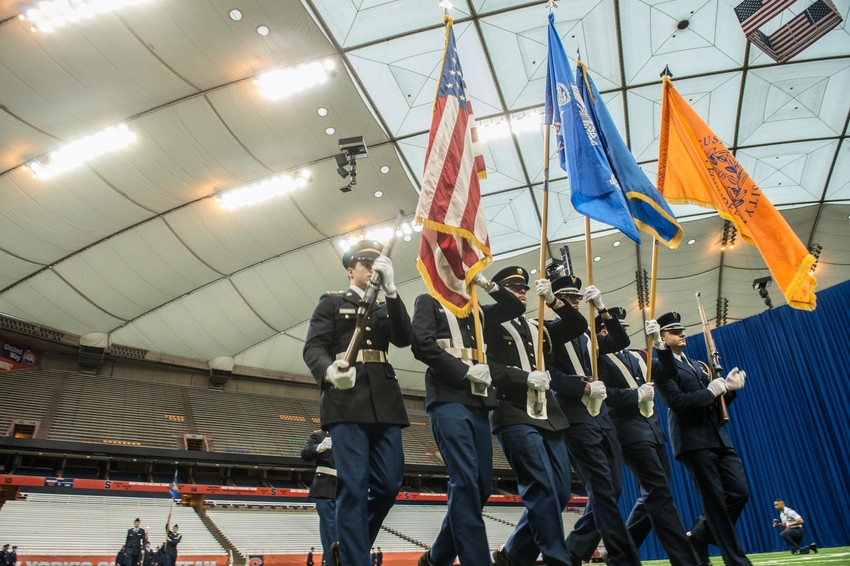 The Chancellor’s Review Award Ceremony is one of the longest consecutive running programs of its kind in the country.

Over the past year ROTC cadets have volunteered their time assisting in Syracuse’s COVID testing efforts, became the first to attend a civil affairs selection course and continued working toward commissioning as second lieutenants in the Army and Air Force throughout the pandemic.

Syracuse University’s ROTC is one of the longest consecutive running programs of its kind in the country. Past distinguished Syracuse University ROTC graduates include Air Force Colonel (retired) Eileen Collins, who was the first woman to pilot and command a Space Shuttle mission, and Major General (retired) Peggy Combs, who became the highest-ranking female military officer to graduate from Syracuse University.  Collins graduated from Syracuse in 1978 with a bachelor of arts in mathematics and economics, and Combs was commissioned in May 1985 as a distinguished military graduate. Combs is currently a board member of the Office of Veteran and Military Affairs.

Cadets will commission as second lieutenants upon completion of their degrees in May.