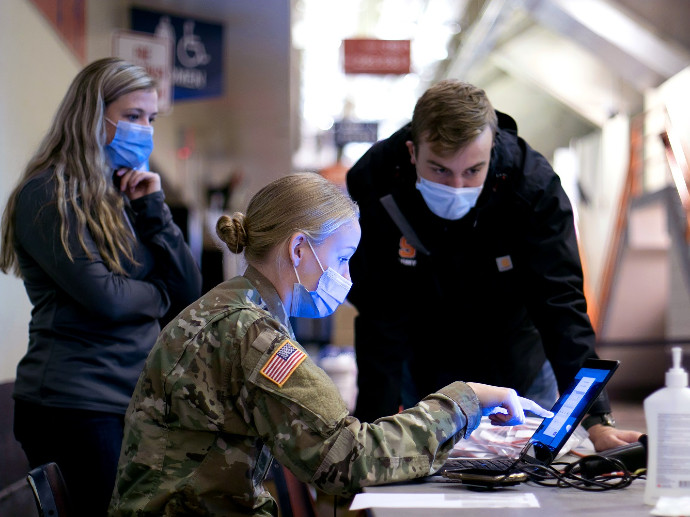 On Oct. 6, the University’s Public Health Team identified an emerging cluster of positive COVID-19 cases on campus. Testing revealed more than 60 new cases over the next four days. After consulting with the Onondaga County Health Department, the University determined that aggressive action was needed. This new threat demanded enhanced surveillance testing. “We needed a lot of help and support,” says Pruthvi Kilaru, program manager in the Department of Public Health in the Falk College. Volunteers were needed to swab and log samples at the stadium on a mass scale. The Public Health Team also needed assistance in the lab to pool samples before they were sent to the lab.

The University’s Army Reserve Officer Training Corps (ROTC) answered the call. Led by political science and Middle Eastern studies major Zach Baxter ’21, since Oct. 7 a total of 43 cadets have logged 175 volunteer hours and facilitated an estimated 6000 tests. “Zach has been an integral part in getting people signed up and getting us staffed. They have really been amazing,” says Kilaru.

Baxter had volunteered earlier in the semester with the Public Health Team and approached Kilaru to ask if there were more opportunities to offer support. “Zach gave me a call around 6 p.m. and by the next day had an entire detail set up,” says Kilaru. “And since then we’ve heavily relied on ROTC cadets helping us out.”

“It started out with just myself and a small group of my team members,” says Baxter. “But once that cluster hit, we realized that we needed to bring in the entire battalion.”

Army ROTC’s Stalwart Battalion Commander LTC Jennifer Gotie says Baxter has hands-on experience that makes him an invaluable resource. “Based on Cadet Baxter’s extensive experience with safety protocols, he is the right leader to effectively manage our volunteers. He works part-time for the Monroe County Sheriff’s Office jail when he’s home from school, so this level of critical support falls well within his wheelhouse,” says Gotie. 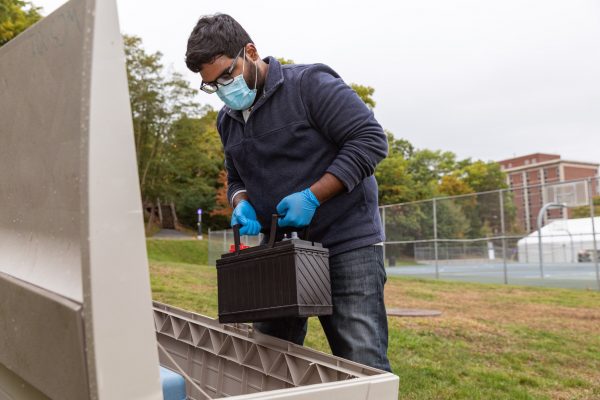 Baxter helped with mitigation and contact tracing at the jail. “I had the opportunity to work under some really knowledgeable professionals. The whole jail command staff was very knowledgeable, and I learned a lot,” says Baxter.

ROTC volunteers make up about half of the Public Health Team’s volunteer workforce. “I genuinely appreciate everything that they do,” says Kilaru. “Especially now when we’re doing whole student body testing at the stadium. Part of the reason we’re able to do this is because of all of the amazing support that we’ve gotten from them.”

Kilaru says Baxter’s ability to organize people has impressed him. “He is amazing when it comes to operations and logistics.” In addition to coordinating volunteers, Baxter stepped in and assisted in wastewater surveillance. He picked up multiple heavy-duty batteries and transported them with his truck and replaced the ice needed to keep the sample receptacle cool at the testing site. Baxter’s fellow cadets have also been equally dependable. “Not a single cadet has let me down. They always come when they’re supposed to, they’re always on time, and they have this service mentality,” Kilaru says.

“I’m not a science major; I’ve never had a pipette before. It has been pretty interesting,” says Baxter. “The learning curve wasn’t that steep. Our experienced volunteers are able to train up our newer cadets quickly.”

Baxter says a major benefit for the cadets is being able to serve the community directly. Being able to serve is why many joined Syracuse University’s Army ROTC, the longest consecutively running program of its kind in the country. “I take it personally. I do not want to go home. I want to stay in here and train,” says Baxter. He feels ROTC’s volunteering is just a part of the campuswide effort to socially distance and complete the semester.  He thinks the individual discipline of most students has been impressive.