Giving Back to Honor a Great Mentor

Share
College of Arts and SciencesDepartment of BiologyForever Orangestudent research 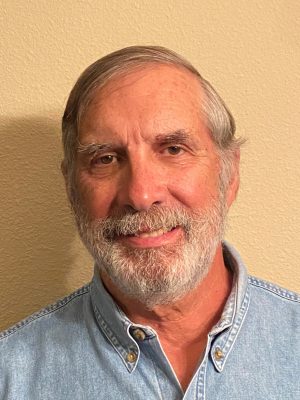 Peter Robison ’78 Ph.D. has established an endowment in honor of professor emeritus Dick Levy to support student research in biology.

Peter Robison G’78 (Ph.D.) remembers joining professor emeritus of biology Richard Levy’s lab in 1974 during a particularly tumultuous time in our nation’s history. Richard Nixon had resigned from the presidency due to the Watergate scandal and students were feeling uncertain and even pessimistic about the state of the government and the country.

“Dick counseled us not to worry, telling us to stick with our studies and things would turn out fine—and it did,” Robison says. “He was definitely a family man and a father figure to us, and we regularly had lab events where our families were also invited.”

Robison, now retired in Florida, laughs when he thinks back on the numerous occasions bringing his two-year-old daughter into the lab on evenings or weekends, setting her up in a playpen, and letting her play with plastic beakers while he carried out experiments.

“I’m not sure if Dick knew, but if he did, I don’t think he had any problem with it,” he says.

Robison says Levy was a guiding mentor to many and motivated students through positive encouragement. He fondly recalls the camaraderie within Levy’s lab. “We had a summer graduate student-faculty softball league up at Skytop. While Dick might not have been an athlete, he was one of our biggest fans and came to support us at just about every game. Everyone working in his lab was like one big family.”

For those like Robison who worked closely with Levy, they got to know that his compassionate nature stretched far beyond the classroom. Joann Ingulli-Fattic, a technician and manager in Levy’s lab during the 1970s, says, “Dick always took the time and care to educate those who sought out his guidance on work-related matters, as well as on many other topics. Dick’s calm, logical and fair approach to situations was generally recognized and he was consulted for his sage advice.”

As a young Jewish boy living in Germany in 1938, Levy and his family were among the millions persecuted by the Nazis under Hitler. At nine years old, he was one of around 10,000 children under age 17 to be granted refuge in England—but he was forced to leave his parents behind in Germany. Levy was taken in by a British family who would also rescue 12 more Jewish children. Read more about Levy’s harrowing story in Syracuse University Magazine.

The memory of fleeing for his life and then being rescued through the generosity of another family stayed with Levy and shaped his moral view. Later in life, Levy paid his experience forward. He established a fund at the Central New York Community Foundation. The endowment supports Jewish organizations dedicated to preserving the memory and names of Jews murdered during the Holocaust as well as organizations that help refugee families reestablish their lives and overcome the barriers to successful integration in their new communities.

Levy’s positive outlook and unwavering commitment to helping others both at Syracuse University and beyond have inspired Robison to create an endowment supporting student research in honor of Dick Levy. His gift to the Department of Biology is part of the University’s Forever Orange campaign. 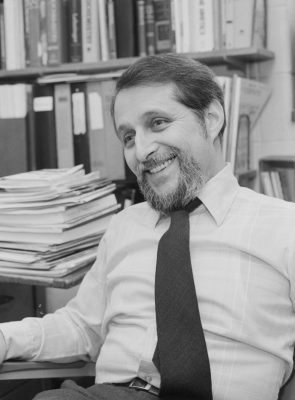 A Backbone in the Biology Department

For over 35 years, Levy was a pillar in the Department of Biology, which this year celebrates its 50th anniversary (the department we know today was formed in 1970-71, after the departments of zoology, bacteriology and botany merged). He served as department chair from 1993-99 and retired from the University with professor emeritus status in 2000. Levy, who still resides in the Syracuse area, is also the author of “Biology at Syracuse University: 1872-2010” (Syracuse University Press, 2012), a book chronicling the department’s growth and crowning achievements.

As a graduate student in biology, Robison studied under Levy, who specialized in enzymology, a branch of biochemistry that deals with enzymes, the catalysts that regulate chemical reactions in living organisms. Robison’s work with Levy at Syracuse was a springboard for a successful decades-long career in the oil industry.

After graduating from Syracuse in 1978, Robison accepted a postdoctoral research position at the University of Texas under the late F. Robert “Bob” Tabita, a 1971 doctoral graduate of Syracuse University’s biology department. There Robison studied enzymology around carbon dioxide fixation, which he says Tabita best described as “the dark side of photosynthesis,” since it is the part of that process of converting inorganic carbon to organic molecules that doesn’t require sunlight. In 1980, he was hired by Texaco to help set up a biomass fermentation laboratory and from there spent the remainder of his career working in the oil industry as a researcher, environmental manager and fuel quality advisor.

A Chance to Give Back 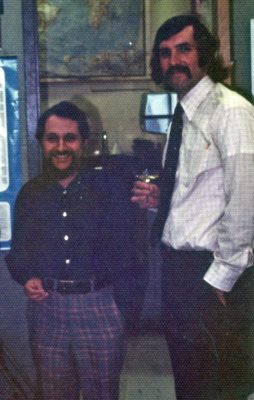 Robison (right) with Levy at Robison’s doctoral defense in 1978.

Throughout his career, Robison never lost sight of his formative years as a graduate student at Syracuse University. “When I think back on my time spent in graduate school, I remember that it is a critical juncture in a person’s scientific career where they are really trying to figure out where they want to go,” Robison says. “I wanted to give back and be able to give back specifically, so I am supporting student research in biology.”

Robison’s endowment will be created with a gift from his estate. He is also making a difference now with annual gifts to the department, to be used for student research in Levy’s honor.

Katharine Lewis, the Laura J. and L. Douglas Meredith Professor for Teaching Excellence and biology department chair, says, “This donation in celebration of Dick Levy is a wonderful way to continue Dick’s already very strong legacy to SU’s biology department. It will enable us to fund student independent research projects, which is obviously crucial for graduate student success and is also often a life-changing experience for our undergraduates.”

Lewis says Robison’s contribution has already funded students with stipends which helped them conduct full-time research over winter break. It will also cover the costs of supplies needed in order to conduct research projects, under the mentorship of biology faculty, this academic year. The department granted three stipends at the end of 2020 (two for $1,000 and one for $2,200) and they expect to make several more this summer.

“Later in life, I have become especially fortunate myself and have been looking for ways to share my good fortune,” says Robison. “I can think of no better way to recognize Dick Levy than by supporting biology student research at Syracuse.”