Share
College of Arts and SciencesDepartment of Earth and Environmental SciencesGeology

On a beach on a remote island in eastern Papua New Guinea, a country located in the southwestern Pacific to the north of Australia, garnet sand reveals an important geologic discovery. Similar to messages in bottles that have traveled across the oceans, sediments derived from the erosion of rocks carry information from another time and place. In this case the grains of garnet sand reveal a story of traveling from the surface to deep into the Earth (~75 miles), and then returning to the surface before ending up on a beach as sand grains. Over the course of this geologic journey the rock type changed as some minerals were changed, and other materials were included (trapped) within the newly formed garnets. The story is preserved in garnet compositions, as well as in their trapped inclusions: solids (e.g., very rare minerals such as coesite – a high pressure form of quartz), liquids (e.g., water) and gases (e.g., CO2). 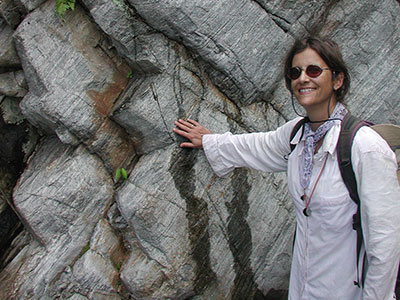 Suzanne Baldwin, Thonis Family Professor in the Department of Earth and Environmental Sciences, has led many field expeditions to Papua New Guinea. Her team’s latest results on this tectonically active region have just been published in the prestigious journal Proceedings of the National Academy of Sciences (PNAS).

By reading the rock record researchers revealed the recycling pathway from the surface to deep within the upper mantle and then back to the surface as a result of tectonic and sedimentary processes. The compositions of that sand also hold various key components that reveal how quickly this recycling happened. In this case, transit through the rock cycle happened in less than ~10 million years. This may seem like a long time, but for these geologic processes it is actually remarkably short.

The garnet sands are just the latest piece of the puzzle to understand the geologic evolution of this region. It is the only location on Earth where active exhumation of high- and ultrahigh- pressure metamorphic rocks is occurring during the same rock cycle that produced these metamorphic rocks. The international group of researchers, including Joseph Gonzalez ’19 Ph.D. from Syracuse University (now a European Research Council postdoctoral researcher at the University of Pavia, Italy), Ph.D. student Jan Schönig and Professor Hilmar von Eynatten from the University Göttingen in Germany, and Professor Hugh Davies (formerly from the University of Papua New Guinea, now at The Australian National University), revealed how the trapped inclusions in garnet sand can be used to determine rock recycling processes within active plate boundary zones. 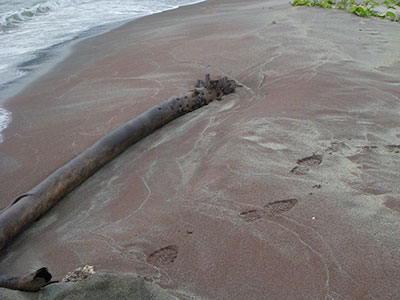 Garnet sand beach on Goodenough Island. These garnets originate from rocks such as the gneiss (pictured above). (Photo credit: Professor Paul Fitzgerald)

At active plate boundaries, like the one the team studied in eastern Papua New Guinea, converging tectonic plates slide toward each other with one plate moving underneath the other to form a subduction zone. During this process, rocks are subducted deep into the Earth. Over time, forces on the plate boundaries may change and rocks can be exhumed to the surface through a process known as lithospheric deformation. The trapped inclusions preserve a record of crustal subduction and rapid exhumation linking upper mantle and surface processes on these short geologic timescales. By applying their approach to both modern sediments and sedimentary rocks, researchers can now reveal the tempo of rock recycling processes throughout Earth’s history.