Congenital heart defects are the most common type of birth defect, affecting nearly 1 percent of births in the United States each year, according to the Centers for Disease Control and Prevention. Doctors have been unable to lower that number due to a lack of knowledge about their source. Thanks to a $2.1 million grant from the National Institutes of Health, an interdisciplinary team of researchers will work to advance the understanding of causes of birth defects. 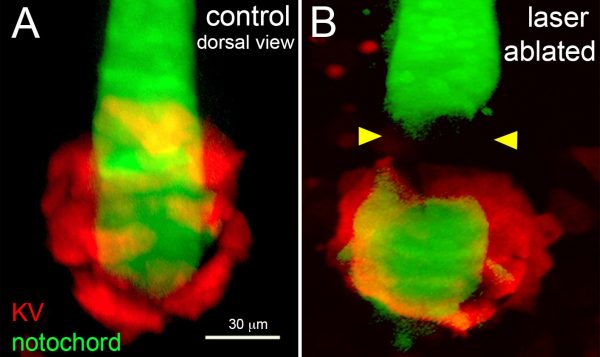 Panel A shows the usual organization of the notochord (green) and the KV (red) in a developing embryo. In panel B, a laser was used to destroy cells in the notochord near the KV, to test the hypothesis that the notochord pushing contributes to KV motion.

While past research has centered on the potential biochemical sources of birth defects, Manning says their research looks to pinpoint mechanical forces that could be causing defects during the early stages of embryo development.

“Our goal is to locate new targets for therapy,” says Manning. “Right now, it’s hard to know which drugs to use because researchers don’t know what’s causing the problem, and if you don’t know the cause then you don’t know how to fix it. If we can identify some mechanical mechanisms at play, in addition to the standard biochemical mechanisms, that could lead us to a whole new way of treating congenital heart defects.” 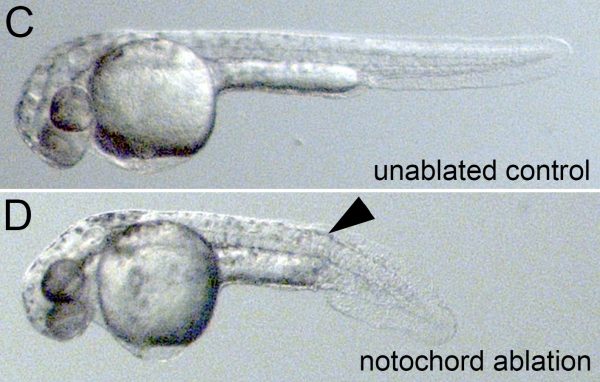 To understand what is happening, you must first go back to the very early stages of an organism’s development. Embryos start out as a simple pair of cells. As they grow, their cells multiply and start to take on specific functions. In order to make sure internal organs are positioned correctly, there is one organ responsible for what is known as left-right (LR) patterning in all vertebrates including fish, mice and humans. This organ ensures, for example, that the heart is correctly positioned on the left side of the body and the liver on the right. This is known as LR asymmetry.

The researchers have focused their studies on the zebrafish, which is a transparent vertebrate, making it ideal to study under a microscope. The specific organ responsible for LR patterning in the zebrafish is the Kupffer’s vesicle (KV), and microscope images from the Amack laboratory demonstrate that the organ moves through the body of the fish as it develops.

The team believes the mechanical forces of that organ moving through the tissue could change cell shapes and drive LR asymmetry in zebrafish embryos. Therefore, defects in this mechanical force generation process could prevent organs such as the heart from developing properly in some cases.

In Manning’s lab, she and Sanematsu have been developing computational models to explore what is happening from a mechanical standpoint during embryonic development. They are producing three-dimensional models of whole tissues to simulate the mechanical forces and determine how motions of the KV could generate shape change. 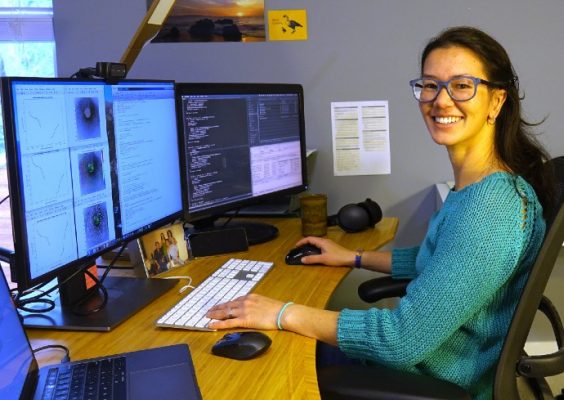 Paula Sanematsu, a physics postdoctoral research associate in Lisa Manning’s lab, runs computer-modeled simulations to determine what is happening from a mechanical standpoint during embryonic development. [Please note, this image was taken prior to the COVID-19 pandemic and does not reflect current public health guidelines.]

For Sanematsu, this work utilizes the skills she developed in scientific computing during her graduate school work and postdoctoral appointment at Louisiana State University. There, she developed computational fluid dynamics (CFD) simulations to describe nanoparticle transport in porous media, which is important in environmental problems like groundwater contamination. She shifted from fluid dynamics to soft matter when she joined Manning’s lab, but says those areas of research have surprising similarities.“I now work on models to study how cells and tissues behave during embryonic development,” she says. “These models are generally not used, if ever, in CFD, but there is actually a good blend of my previous experience because I am using a lot of the CFD tools to analyze how tissues can behave similarly to a fluid.”The team is now confirming their computer-modeled calculations using physical experiments to determine the effects of mechanical forces on an organism’s development.
Through advanced scientific techniques including laser ablation and optogenetics, they will analyze how cells react to various mechanical forces. Using laser ablation, the team will cut interfaces between cells and study the resulting movement, in order to alter and measure forces between cells in the tissue. Using optogenetics, they will shine light on cells to drive pre-programmed changes to individual cell mechanics. In both cases, they will observe how these localized mechanical changes alter organ formation and LR asymmetry in embryos.

This cutting-edge research identifies a whole new paradigm to explore in humans, says Manning. While it might not yield a specific drug target yet, it gives the scientific community a new set of ideas of what could be targets.

“The long-term goal here is helping with diagnostics and prevention,” says Manning. “There is very little you can do for congenital left-right patterning problems and our new ideas will hopefully drive new methodologies for how to test for and eventually treat them earlier.”