What to Watch: Total Solar Eclipse, Stargazing on the Solstice 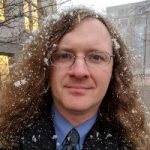 Q: What can you tell us about the upcoming total solar eclipse?

A: The upcoming solar eclipse will be in South America, but nature will treat us in New York to a total solar eclipse on April 8, 2024. Buffalo, Rochester, and Watertown will be near the center of the moon’s shadow and will get around three and a half minutes of totality; Syracuse, near the edge of the path of totality, will get one and a half. So, while the South American eclipse will be out of our reach, in three and a half years we will get our own. I will certainly be out there watching it!

Q: What is the upcoming “Christmas star” event and why is it significant?

A: The near-conjunction of Jupiter and Saturn, oddly enough, is a result of the same sort of coincidence. In an eclipse, the Earth, sun, and moon are all aligned, so that the moon’s shadow falls on the Earth. In this planetary conjunction the Earth, Saturn, and Jupiter will be very nearly aligned so that Jupiter and Saturn appear near each other in the sky. These events happen as often as they do because almost all of the objects in the solar system – the planets, the sun, and the moon – orbit on the same plane.

Every night, Jupiter and Saturn are appearing closer and closer in the night sky as their orbits and ours carry us closer to alignment. They are not really that close; even at conjunction, they are separated by around five times the distance from the Earth to the sun, many hundreds of millions of miles. They will be closest to each other on December 21, but we will have only a short window to observe them. This is because as we move in our orbit, the sun is closer to being lined up with these planets. On December 21, the sun will set around 4:30. After that, it is a race – the sky must get dark enough to see Jupiter and Saturn before they set as well, around 6:45.

Q: What will people be able to see, and will they need special equipment?

A: To see the conjunction most easily, find a spot with a clear view of the southwestern horizon, free of city lights; Jupiter and Saturn will likely stand out from the twilight glow starting around 5:00 or 5:15. With binoculars, a telescope, or a telephoto lens of 500mm focal length or more, you may also be able to see the four largest moons of Jupiter. Four hundred years ago, Galileo saw these moons with the first astronomical telescope and, over a period of days, saw them orbiting Jupiter. This was one of the crucial observations that led him to conclude that the sun was at the center of the solar system, and in many ways marks the beginning of modern science.

December 21 is also the winter solstice. It’s completely an accident that these events are happening on the same day; the solstices relate to the tilt of Earth’s axis, which is independent of the orbits of Jupiter and Saturn. There’s no better way to celebrate the longest night of the year than watching the stars. So if you’re planning a night of stargazing on the solstice, start off by admiring the largest planets before they set!