Syracuse University College of Engineering and Computer Science (ECS) Professor Vir Phoha has been elected a fellow of the National Academy of Inventors (NAI). Recognized globally as one of the top computer scientists in behavioral and continuous authentication, Phoha’s research has enabled millions of online transactions to be conducted safely. He has published 250 papers and six books on security related topics. Phoha is a prolific academic inventor. He holds 14 U.S. patents for his pioneering work in behavioral authentication. Phoha will be formally inducted at a ceremony at the NAI’s Tenth Annual Meeting on June 8, 2021 in Tampa, Florida. 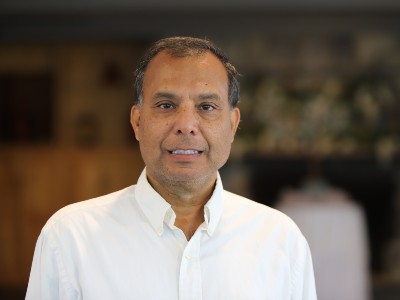 The NAI Fellows Program, which has elected 1,228 fellows globally, is awarded to academic inventors whose scholarship and innovations have a wide-ranging positive impact on both industry and the general welfare of society. Being elected an NAI Fellow is the highest professional distinction for academic inventors. Phoha’s research and insights have led to the development of authentication methods that use routine interactions as signatures of an individual’s identity.

Originally from India, Phoha came to the United States in 1988 as a graduate student at Texas Tech University. Today he considers Syracuse to be his hometown. He has always been interested in the science of security. His curiosity began first with networks and how to ensure someone sending an email could be authenticated.

Phoha says this concept goes beyond just a password challenge. Every user follows unconscious patterns when typing, browsing, swiping and even walking. These behaviors act as an underlying communication of a user’s authenticity. Taken together, these actions are akin to a digital fingerprint. This groundbreaking research and its applications are widely used in the commercial software industry. “The greatest motivation to continue this work is because there are a lot of problems still to be solved,” says Phoha. “The field is in its infancy. We’re just starting to understand many things, it is a wide-open field and a lot of this work still needs to be done.”

“This is both a profound and an eminently deserved acknowledgement of Professor Phoha’s accomplishments,” says J. Cole Smith, dean of the College of Engineering and Computer Science. “He exemplifies how research and classroom learning can lead to incredible innovations that shape industry.  As a successful inventor, he brings insight into the process to Syracuse University students.”

As a professor in the electrical engineering and computer science department, Phoha is also influencing this fledgling field by mentoring the next generation of researchers. Phoha has helped guide the research of 85 graduate students. Under his direction, 17 Ph.D. students have graduated. Many of his students hold faculty positions at Carnegie Classification 1 research universities; are scientists at places such as NASA, or working at leading U.S. companies such as Google, Facebook and Amazon. “Ultimately the torch has to be passed on to the next generation,” says Phoha. Training students in behavioral authentication will become more important because online interactions in virtual worlds is becoming more common. “These problems of identification, verification and authentication will potentially be highly impactful domains where a lot of work can be done, which can make society much safer,” he says.