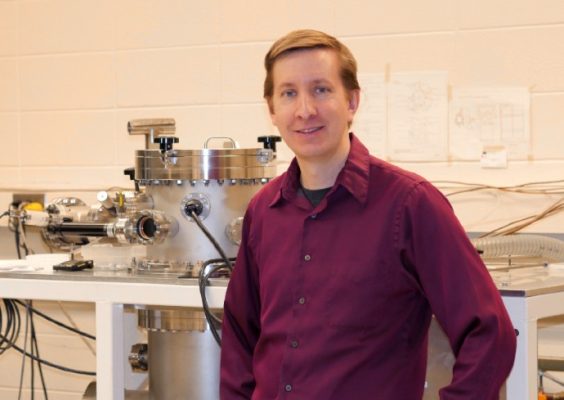 Britton Plourde is used to applying for funding for his lab’s research in quantum computing. The physics professor writes grants and polishes proposals that help his team take the next steps in the journey from theory and basic design to modeling to initial prototypes to testing, replication and validation of new technologies. It’s a competitive process, but one that often doesn’t include hearing from your competition and answering rapid-fire questions from potential funders.

That changed for Plourde’s team in early September, when more than 1,000 experts and interested parties from around the world attended a first-of-its-kind live virtual event that included a “Million Dollar International Quantum U Tech Accelerator” supported by the Air Force Office of Scientific Research and Office of Naval Research. His team—one of about 250 in the competition—became one of just 18 finalists for startup funding to support his lab’s research into new designs that will allow quantum communication inside and between quantum computers.

“We’re really fortunate to have this unique partnership very close to Syracuse in Rome, New York, at the Air Force Research Lab. The new Innovare Advancement Center located there brings together public and private partners to create a facility with labs, offices and collaboration space that is less than an hour’s drive from campus,” said Plourde. “The opportunity to collaborate with an organization that is rapidly becoming a center for quantum information science research is very exciting—as is being selected as finalists from an extremely competitive field.”

Instead of writing a grant and waiting for reviewers’ comments and a program manager’s decision, Plourde and his team submitted a proposal, created a poster presentation and pitched their ideas for using metamaterial ring resonators to interact with qubits—the fundamental building blocks of quantum information—to transmit quantum information between nodes on a chip, and eventually, when combined with other quantum technologies, between quantum computers in a lab or over even longer distances. Metamaterial ring resonators are structures made from superconducting metamaterial transmission lines. The Plourde lab recently developed linear transmission lines made from these metamaterials—engineered to have wave properties not found in naturally occurring materials. Bending these lines into a ring configuration allows researchers to explore their novel resonant properties.

“It was a much faster process than a normal grant application and, to become a finalist, we had ten minutes to pitch our ideas to a panel of judges,” Plourde said. “But it was also a chance to get to know the partners working together at Innovare and understand the potential for collaboration—for our faculty, graduate and undergraduate students—right here in our region.”

Quantum information science has the potential to drive breakthroughs in materials science, drug design and other fields where solving key problems involves organizing and analyzing almost unimaginable amounts of data—problems that our current computing technology would take centuries to solve.

Plourde’s research is at the frontier of transmitting and processing quantum information on a chip, with the eventual possibility of forming a distributed quantum network over large distances. His team’s proposal involves designs for processing nodes that would serve as waystations where quantum information, encoded in qubits, is processed and relayed to a new endpoint.

“I hope that this is just the first step in building partnerships with Innovare, the Air Force, the Navy and others in the public and private sectors who are as excited about the potential of this field as we are here at Syracuse University.”

Quantum information science is one of ten research clusters that Syracuse University has identified to promote collaboration between disciplines, attract and retain top faculty and drive research innovation.