Both of the post-graduation options Santita Ebangwese ’19, G’20 was considering would be a dream come true for most people. Would she rather play professional volleyball in Europe or go to medical school? 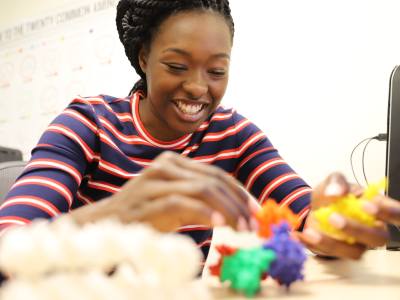 During her incredible career at Syracuse University, Ebangwese was an All-American volleyball player, a University Scholar, a member of the Renée Crown University Honors Program, an accomplished researcher, the 2018 ACC Volleyball Scholar-Athlete of the Year, a four-time ACC All-Academic Team selection, played for the Orange women’s soccer team, completed her bioengineering bachelor’s degree and finished her master’s degree this spring.

Even with all her accolades, Ebangwese wanted to gain more experimental training and also have a chance to study abroad. Even with her busy volleyball schedule as an undergraduate student, she was able to take part in a six-week Syracuse Abroad summer trip to Strasbourg, France, where she completed an engineering internship at the National Institute for Applied Sciences (INSA). Ebangwese minored in French and could speak the language in conversation.

Later, an advisor recommended she look into the Fulbright Scholar Program and opportunities in France. “She told me, you need to keep speaking French if you want to become fluent,” Ebangwese says.

Ebangwese was intrigued and decided to apply in fall 2019. Even with incredible options on the table and long odds—only about 20 percent of applicants are accepted–Ebangwese knew she wanted to pursue becoming a Fulbright Scholar. “I want to be the best I can be, no matter what obstacle is in my way,” she says.

In late February, Ebangwese received an update from the Fulbright Student Program about her application. At first, she thought it was just a processing update, but then she noticed it said “Your Status Has Changed.” When she read the message more closely, she realized that she had been accepted.

“I couldn’t believe it. I was excited, I talked to my friends, my mentors,” Ebangwese says.

Ebangwese will be completing a master’s degree in life science and health at the Université de Paris-Saclay. She plans to focus on tissue cells and gene biotherapy research, and she believes everything she has done so far has prepared her for this opportunity.

“In the end, I still want to go to med school, but right now this is an incredible experience to have,” Ebangwese says.