Nandhini Rajagopal, a biomedical and chemical engineering doctoral student in Professor Shikha Nangia’s research group in the College of Engineering and Computer Science, has won the American Chemical Society’s prestigious Chemical Computing Group Research Excellence Award. This award recognizes exceptional research conducted by graduate students in the field of computational chemistry. The winners of the award are chosen based on the quality and significance of the research. Rajagopal will receive financial support to present her work at the national ACS meeting in the fall. 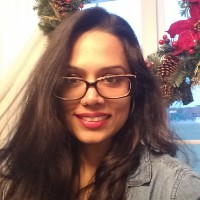 Rajagopal obtained her master’s degree in mechanical engineering at Syracuse University before starting the Ph.D. program in biomedical and chemical engineering in 2016. She is the second student from the College of Engineering and Computer Science to receive the award; the first, Wenjuan Jiang G’16, a Nangia research group alumna, won the award in 2016.

Rajagopal’s work is in the discovery of the blood-brain barrier, for which she developed a new algorithmic approach called “Protein Association Energy Landscape” (PANEL). The PANEL required extensive programming in python and testing. The manuscript describing this work was published last fall in the American Chemical Society’s highly reputed Journal of Chemical Theory and Computation 15, 11, 6444-6455, (2019), and was highlighted on the journal cover.

“Nandhini has single-handedly developed the highly efficient PANEL method that outperforms current approaches to study interactions between membrane proteins, which is why the selection committee gave her the Chemical Computing Group Excellence Award,” says Nangia.