Each year, more than 75 million urinary catheters are used in the United States to help patients who cannot control urination due to medical complications. Unfortunately, the catheters are prone to colonization by bacterial and fungal pathogens. If not addressed, this can lead to catheter associated urinary tract infections (CAUTIs) that are antibiotic resistant and cause 13,000 deaths in the U.S. each year. To address the challenge of CAUTI,  College of Engineering and Computer Science professors Dacheng Ren, professor of biomedical and chemical engineering; Teng Zhang, professor of mechanical and aerospace engineering; and Huan Gu, research assistant professor, started investigating if they could engineer smart anti-fouling catheters that would reduce microbial attachment and related infections. 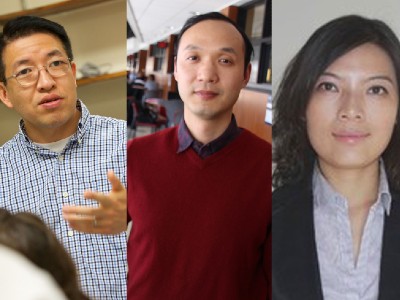 “The idea of this work was inspired by biological systems in nature. For example, humans have developed innate immunity that protect us from infections despite our constant contact with bacteria,” says Ren. “We thought that maybe antifouling catheters can be engineered with active topographies mimicking the cilia of epithelial cells, which can beat to repel bacteria from the lung.”

They successfully created micron-sized pillars with supermagnetic nanoparticles on the tip so the pillars can beat in response to an electromagnetic field generated using an insulated copper coil embedded in the catheter wall. By controlling the on and off of an electric current, they found they could turn the magnetic field on and off as well, and thus control the beating frequency and beating force of the pillars. This strategy worked well, as their prototype catheter remained clean for 30 days while the control catheters were blocked by biofilms of uropathogenic Escherichia coli within five days in an in vitro test with flow of a medium mimicking urine. Their study was published in a recent issue of Nature Communications.

Close collaboration between the experimental work in Ren’s lab and the numerical simulation from Zhang were the keys to this study.

“The simulations based on mechanics models allow us to verify our hypothesis of the biofilm failure and identify the important governing factors, which can provide a quantitative guidance of the pillar design for a more efficient removal of the biofilms,” says Zhang.

Related research work in Ren and Zhang’s labs is funded by the National Institutes of Health and the National Science Foundation.