Share
College of Arts and SciencesGirls in ScienceSTEMWomen in Science 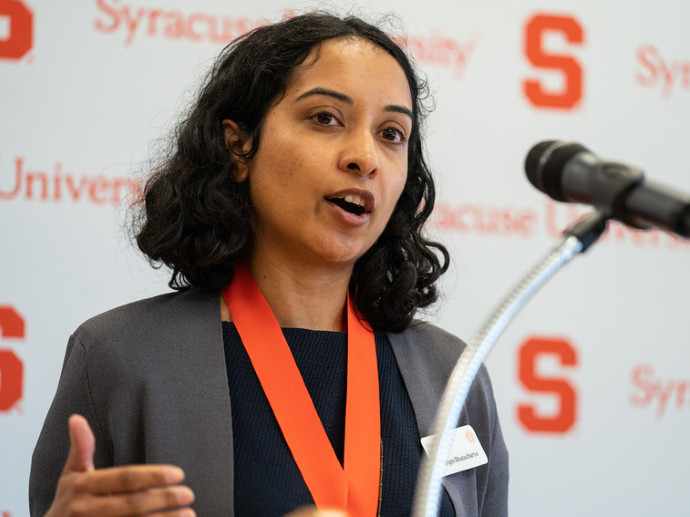 For Tripti Bhattacharya, the road to a career in earth sciences has taken a few twists and turns along the way. Bhattacharya, the Thonis Family Assistant Professor of Earth Sciences, first thought she would explore a career in environmental policy before she dove into the world of climate science. Today in the College of Arts and Sciences, Bhattacharya researches climate models and past cold and warm climates to better inform our understanding of the future.

“To really make an impact, you have to have some grounding in the science,” says Bhattacharya.

Grounding more women and girls in the science, technology, engineering and mathematics (STEM) fields is one of the primary goals of the internationally recognized Day of Women and Girls in Science. The United Nations General Assembly adopted the day to promote full and equal access for women and girls to the fields of science and technology. The day continues to gain traction, with social media posts utilizing the hashtag #WomenInScience every year on Feb. 11 to raise awareness about the need for more diversity and inclusion in the sciences.

According to a 2019 National Science Foundation report that tracks women, minorities and persons with disabilities in the science and engineering fields, the share of women earning bachelor’s degrees in math and statistics has declined over the last two decades. And while women make up half of the total U.S. college-educated workforce, they only account for 28 percent of the science and engineering workforce.

“While there has been some progress and I see a lot of young, diverse faces at the table, we still need to ask ourselves the question ‘why don’t we see diversity at the upper levels in those careers and what can we do to improve that situation?’” says Bhattacharya. “Women deserve to be at the table because we’re talented and we’re humans and we have something to say.”

She credits good mentors as one of the main reasons she has been able to craft her passion into a career, starting with an elementary computer lab teacher who shared books with her about the ocean to mentors that poured into her in future pursuits of becoming a professor in graduate school.

“Good mentoring can make a huge difference for women at all career stages and that’s why I really hope to serve as a mentor to a lot of the undergrad women who work in my lab,” says Bhattacharya.

Professor Bhattacharya wrote the Newsweek opinion piece, “On International Day of Women and Girls in Science, the Problem of Gender Diversity in STEM Is Clear,” which was published Feb. 11, 2020.