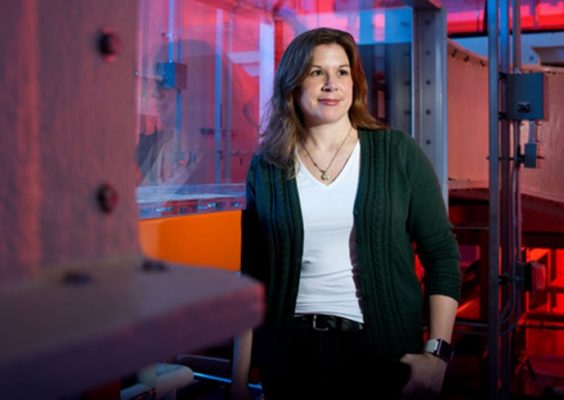 Melissa Green, associate professor of mechanical and aerospace engineering in the College of Engineering and Computer Science (ECS), has been named an Associate Fellow of the American Institute of Aeronautics and Astronautics (AIAA). The prestigious title is awarded to those who have made notable and valuable contributions to the arts, sciences, or technology of aeronautics or astronautics. Green will be officially inducted at the AIAA Associate Fellows Recognition Ceremony on January 6, 2020, at the AIAA SciTech Forum in Orlando, Florida.

Green teaches mechanical and aerospace engineering courses and researches experimental fluid dynamics. She studies the organization of fluid motion in coherent structures to understand fluid phenomena in a range of applications. In particular, her group has investigated biologically-inspired fluid problems, such as fish propelling themselves through water, and fundamental aerospace problems such as flow separation over delta wings.

Green has completed research for the Office of Naval Research to study the topology of force production in unsteady flows around swept wings and to contribute to the design of underwater vessels that mimic, and even improve upon, the movement of marine wildlife. Her group was also previously funded by the Air Force Office of Scientific Research to study fundamental unsteady flow separation in aerospace applications. More recently, she has started to explore the use of virtual reality as an immersive method for data visualization and communication.

Green says, “Since I joined Syracuse University in 2012, my participation in AIAA and its Fluid Dynamics Technical Committee has played an important role in how my research group has grown. To then also be recognized as having made a significant contribution to AIAA, and to my community in general, is a great honor.”