Few things move with the agility or grace of a fish. Using subtle, waving movements, they slip silently through water. Yet, look closely and you can see that not all fish swim alike. Great white sharks with forked tails are built for bursts of speed. Serpentine eels have the ability to change direction on a dime. Tunas have a streamlined form that allows them to travel smoothly for long distances. The differences in their bodies and fins, developed over eons of evolutionary pressure, give them disparate abilities to move through the water. 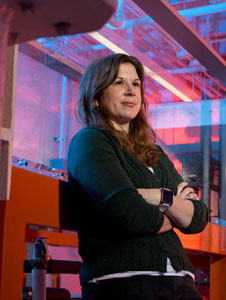 Melissa Green in her lab

The effective swimming methods of fish and other aquatic animals are the inspiration for the Office of Naval Research’s (ONR) Biologically Inspired Underwater Propulsion Program. The program aims to create underwater vessels that mimic, and even improve upon, the movement of underwater wildlife. As part of this program, Melissa Green, assistant professor in the College of Engineering and Computer Science, has been awarded a three-year, $650,000 grant for her work on “Lagrangian methods in unsteady propulsion: characterizing vortex wake structure and force production.” Green specializes in the area of fundamental fluid dynamics, specifically vortex dynamics and bio-inspired propulsion

Of all the features that affect fish movement, the flapping of the tail, or caudal fin, is one of the most important. This is where Green and her research team come in. In a water channel in her lab at the Syracuse Center of Excellence (CoE), she will experiment with a rigid piece of thin plastic that is equipped to move side to side at different speeds, just like a caudal fin, as gallons of water flow around it. Green will measure the force on the plastic flapping fin and observe the swirling water that the swish of the plastic tail leaves behind.

Green explains, “Even with a simulated caudal fin so simple and at a low amplitude of flapping, you get flow dynamics that are really three dimensional, rich and complex. I use Langrangian coherent structures to look at this swirling water the flapping creates, known as vortex streets. Vortex streets are like a signature of what happens when the fin interacts with the water. You can tell if the structure of the wake propulsion was created efficiently or not. With this grant, our job is to characterize and quantitatively map these structures to the actuation used to create them, and to the measured propulsive performance. The long-term goal is to be able to choose to make a wake that looks like what we know is an efficient wake, or a powerful wake, or a ‘sharp right turn,’ and then we can start stitching actuation together for more complex motion planning.”

This research will inform the design and control strategies for a range of underwater vehicle applications—primarily small, unmanned vessels. Green’s work will help ONR determine what it takes to make a vehicle with quick, powerful bursts of speed, travel long distances, using very little energy, or be able to maneuver and change direction suddenly. Through the research of Green’s labs and the ONR’s Biologically Inspired Underwater Propulsion Program, man-made “fish” may eventually out-swim the genuine article.