Last month, 15 students, faculty and alumni were climbing high into the Canadian Rockies as part of the “Trilobites on Ice” immersive learning experience through Syracuse University. The group spent six days amongst the spectacular scenery and geology of Alberta and British Columbia, reaching rare and exquisite fossil beds of the Cambrian age.

View while hiking to Walcott Quarry. (Photo by Emily Judd)

The idea came about in Feb. 2018 when Cathryn Newton, special advisor to the Chancellor and Provost for faculty engagement at Syracuse University, invited Matt James, professor of geology at Sonoma State University, to give a lecture on his recent Galapagos book, “Collecting Evolution,” in celebration of Darwin Day. At the event, James mentioned that every summer for over a decade he brought his students to the famed Burgess Shale. The lecture room, full of geologists, audibly gasped in exhilaration. On the spot, James agreed to lead a trip if Newton would design and co-lead a deeply Orange version for students, faculty and alumni.

James and Newton held true to their promise this summer, and the 15 scientists embarked on what participant Emily Judd, doctoral student in the Department of Earth Sciences, called a “paleontologist’s pilgrimage.” 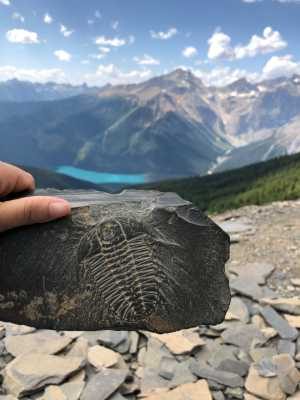 Each day was filled with a new adventure. Throughout the Banff Yoho and Jasper National Parks, the group explored fossil beds of the Cambrian age that preserve even soft-bodied animals, giving a window into early marine communities. The fossils include both surviving groups of organisms and highly experimental forms that have no modern counterparts. One of the most anticipated geological spots they visited, the Burgess Shale, is an estimated 508 million years old, representing one of the oldest sites with rare soft-bodied preservation.

“I went into the Earth sciences because of opportunities like this. Geology and paleontology are unique sciences because of how hands-on and experiential they are, and doing fieldwork is the cornerstone of being an Earth scientist,” says Judd. “Field trips like this reinforce concepts taught in the classroom, give me ideas about how to more effectively teach concepts in the future, spur new research questions and reinvigorate my passion for the Earth sciences.”

The 15-person group was atypical; it included undergraduate through doctoral students, faculty and staff and Board of Trustees Vice Chair Michael Thonis ’72. Each member of the group brought a different lens to the trip, with expertise ranging from paleoecology and evolutionary biology to structural geology and geochemistry. This breadth of experience created even more learning opportunities for all involved.

Thonis, a 1972 graduate of the Earth sciences program at Syracuse University, has stayed closely involved with the Department of Earth Sciences, College of Arts and Sciences and Syracuse University since graduating. “Trilobites on Ice” for him was a perfect way to continue his connection to both the University and geology. 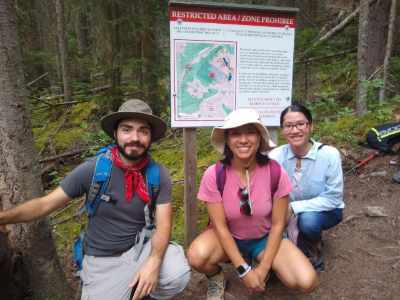 He says of the experience: “We remind ourselves in geology to ‘let the rocks speak to us.’ In British Columbia, we visited the finest fossilized examples of the earliest multicellular life, right alongside some of the most significant examples of recent alpine glaciers and their unfolding histories. I have read about both of these, but seeing them in person was far more powerful and inspiring. The rocks spoke to me.”

The youngest of the bunch was Lindsay Moon ’19, who was able to go along on the trip only two months after graduating the Earth sciences undergraduate program. Moon viewed this trip as an unparalleled way to kick start her career, right before leaving to be commissioned as an officer of oceanography in the United States Navy.

“The learning opportunities on this trip were endless and being able to sit and listen to the experts in my company talk passionately about what they love was invaluable,” says Moon. “I know that my appreciation for the things I have seen and experienced on this trip will only deepen as my career evolves and grows, making this opportunity truly priceless”

Although at different points in their lives, the group worked as a collective, experiencing these once-in-a-lifetime moments together that many geologists study but rarely witness. For each participant, different moments struck different impactful chords of their never-ending quest for knowledge. 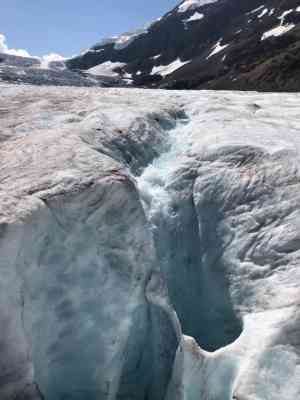 For Judd, the most memorable part of the trip was hiking across the Athabasca Glacier. Her doctoral research focuses on reconstructing climatic conditions in Antarctica millions of years ago, so it has been a lifelong goal to visit the continent. The Athabasca Glacier gave her a close feeling to what that bucket list trip may be like.

“The ice field itself was a sensory overload. Rushing streams of  light blue glacial water weaved across the surface of the ice, occasionally disappearing into moulin, which is deep and often massive holes in the ice, or giving way to giant crevasses elegantly carved by the running water,” says Judd. “You could literally hear a creaking, as the ice moved at a glacial pace under your feet, and every so often, ice from the mountain glaciers above would calve into the valley below, generating a thundering boom.

I can genuinely say, without hyperbole, that it was the best day of my life.”