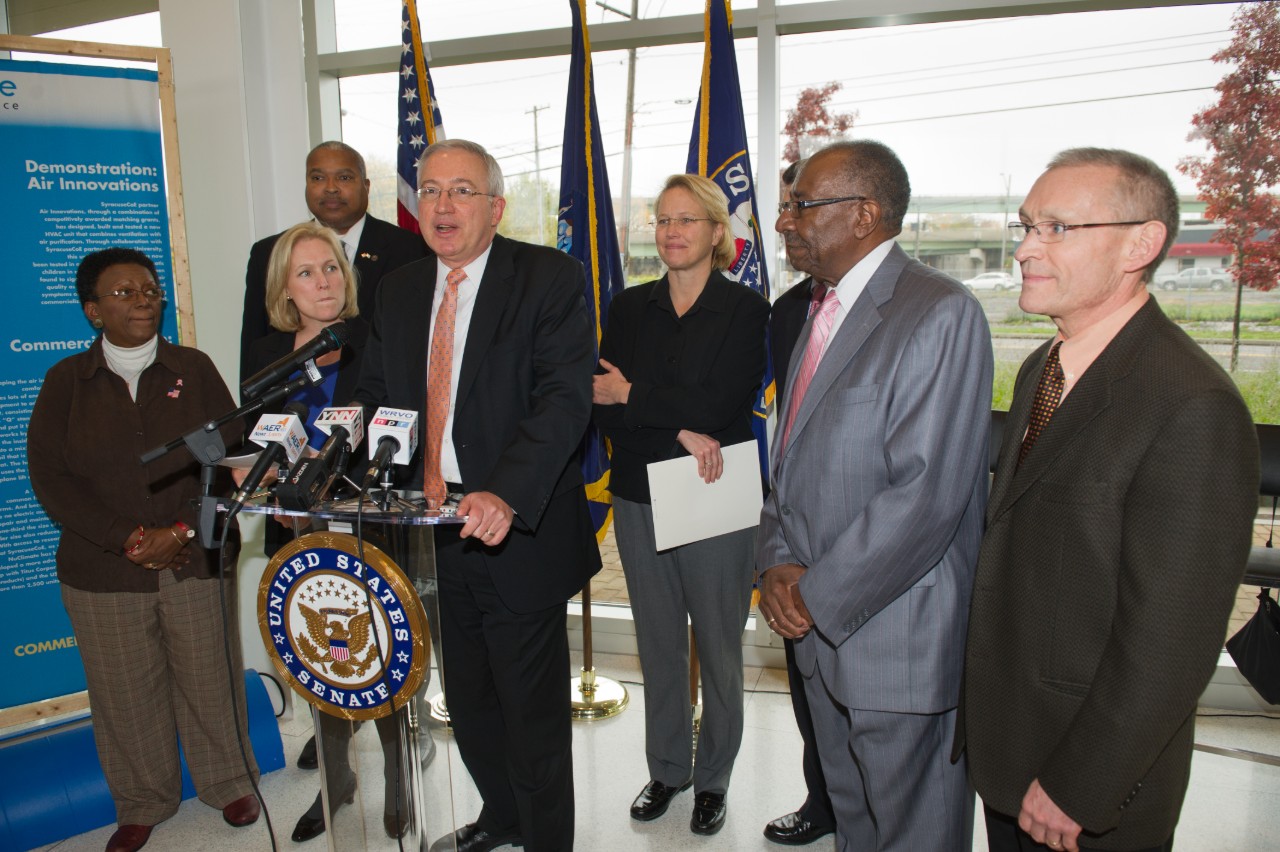 Ed Bogucz, at podium, with U.S. Sen. Kirsten Gillibrand, to his immediate right, and local officials at a SyracuseCoE media event.

For more than 15 years, Edward A. “Ed” Bogucz has helped put Syracuse University at the forefront of addressing global challenges for cleaner energy and healthier built environments. Now, the founding executive director of SyracuseCoE, New York State’s Center of Excellence in Environmental and Energy Systems, is returning to the classroom—to teach, research and mentor—to prepare the next generation of innovators.

Beginning Sept. 1, Laura J. Steinberg, professor of civil and environmental engineering and executive director of the Syracuse University Infrastructure Institute, will serve as interim executive director of SyracuseCoE while a national search takes place. A search committee will be appointed once the new dean of the College of Engineering and Computer Science is announced. 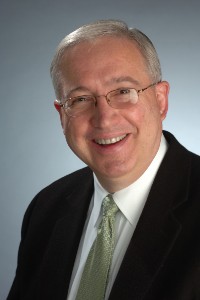 Long before he took the helm of SyracuseCoE, Bogucz was building successful collaborations among university, industry and government partners in education, research, technology transfer and economic development projects as a faculty member and dean in Syracuse University’s College of Engineering and Computer Science. In August 2003, he was appointed SyracuseCoE executive director. To date, SyracuseCoE has engaged more than 200 companies and institutions in collaborative projects to tackle regional and global challenges in clean energy, indoor environmental quality and water resources. Bogucz helped to create an innovation ecosystem of research, demonstration and commercialization projects to bring energy and environmental innovations from lab to market.

“Ed is one of those stellar thinkers, innovators and inspiring leaders who helped elevate the entire research enterprise,” says John Liu, the University’s vice president for research. “He helped to bring significant federal and state funding to catalyze research, development and demonstration projects to accelerate innovations for cleaner energy, healthier buildings and more resilient communities. And he has attracted international attention to the University through his leadership in this field, including hosting the Healthy Buildings conference in 2009 and opening the LEED-Platinum living laboratory headquarters in downtown Syracuse, a thriving hub for industry-university collaborations. Last year, SyracuseCoE hosted the International Building Physics Conference, attracting hundreds of high-caliber researchers from all over the world to Syracuse.”

“I have had the privilege of helping Syracuse University rise to national prominence in the field of energy and environmental research and innovation,” says Bogucz. “Now, I look forward to returning to the classroom and collaborating with fellow faculty members to help prepare our students to be leaders in creating solutions for a low-carbon, resilient future.” Bogucz will be on a yearlong sabbatical before returning to the classroom in fall 2020.

Bogucz once told The New York Times that the City of Syracuse was a laboratory “at a great scale … big enough to have density and small enough that you can study the whole thing.” At the time, the SyracuseCoE teamed up with collaborators from the Syracuse University School of Architecture and Home HeadQuarters, a local nonprofit developer, to develop innovative designs for low-energy affordable homes, build them and verify their performance.

Prior to the SyracuseCoE, Bogucz served more than eight years as dean of the College of Engineering and Computer Science, where he is an associate professor of mechanical and aerospace engineering, with teaching and research expertise in fluid mechanics, heat transfer and multidisciplinary analysis and design. Bogucz is a 2011 recipient of the Chancellor’s Citation for Excellence. The SyracuseCoE received the U.S. Green Building Council’s Leadership Award in 2010.

Bogucz is principal investigator or co-PI, or has served in these roles, for projects totaling more than $90 million to date from sponsors that include the U.S. Environmental Protection Agency, the U.S. Department of Energy, the U.S. Economic Development Administration, NASA, the National Science Foundation, NYSTAR, the New York State Energy Research and Development Authority, Empire State Development, the New York Power Authority, Carrier/United Technologies Corp. and National Grid.