Swimming in a Sea of Neutrinos: Ph.D. Candidate Avinay Bhat Discusses His Research Into the Universe’s Smallest, Most Elusive Particles 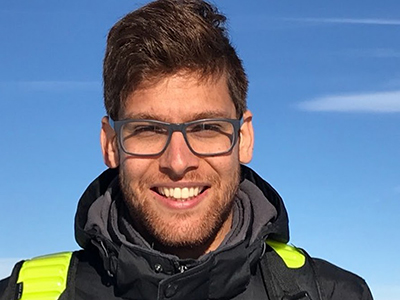 Ph.D. candidate Avinay Bhat studies neutrinos—tiny, elusive particles that hold clues about the origin of the Universe. As a member of the High-Energy Physics (HEP) research group, he also builds components for a major experiment at Fermilab, a U.S. Department of Energy physics lab near Chicago.

“The components are for the Short-Baseline Near Detector [SBND], one of three particle detectors in Fermilab’s Short-Baseline [SBN] Program,” says Bhat, who has worked at Fermilab since November.

SBN focuses on neutrino oscillation, the process by which neutrinos change types, or flavors, as they hurtle through space and matter close to the speed of light.

Neutrinos come in three flavors, but SBN is searching for evidence of a fourth, known as the sterile neutrino. “Proving its existence would change the way we look at elementary physics,” says Bhat, adding that sterile neutrinos do not emit light or energy.

The College of Arts and Sciences recently spoke with Bhat about his innovative work in the Department of Physics.

I’m told that massive stars do not go gently into that good night—that they explode in a supernova, whose energy is carried away by a burst of neutrinos.
These explosions are called core-collapse supernovae, which give birth to neutron stars and black holes. I study neutrinos from these events.

Interesting.
Due to their low energies, supernova neutrino interactions are difficult to reconstruct in MicroBooNE, where I do physics analysis….“MicroBooNE” is short for “Micro Booster Neutrino Experiment,” a multinational project in which hundreds of scientists study neutrino interactions.

Say more about core-collapse.
The core of a giant collapsing star is incredibly dense. When energy from a star’s nuclear reaction cannot hold its mass, gravity causes the outer layers of the star to fall inward. Thus, the core experiences a collapse.

During the collapse, almost 99 percent of the star’s binding energy is released in the form of neutrinos, which travel in all flavors and in all directions. 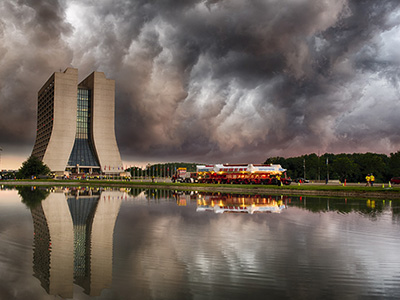 Fermilab, outside of Chicago (Photo courtesy of Reidar Hahn/Fermilab)

And you detect these neutrinos in MicroBooNE—
The neutrinos arrive in MicroBooNE before the light [from the core-collapse supernova] reaches telescopes on Earth. Therefore, we can tell astronomers where to point their telescopes in the sky, in time to observe a supernova explosion.

What else do you do at Fermilab?
In addition to MicroBooNE physics analysis, I do SBND hardware installation. Both projects fall under the realm of experimental neutrino physics.

Would you elaborate?
Because neutrinos have no charge and very little mass, they rarely interact with other particles. In fact, most of them pass through Earth undetected.

Neutrinos occasionally collide with atoms. When that happens, we study their interactions to learn more about the properties of neutrinos and their role in the Universe.

With SBND, [postdoc] Pip Hamilton and I have been working on the APA wiring effort.

For those keeping score, an APA [anode plane assembly] is a large, rectangular frame on a liquid-argon particular detector. Each APA contains nearly 15 miles of delicate wire, which records signals created by neutrino collisions.
Right. Pip and I spent most of last year at the Wright Lab [at Yale] doing wiring. In November, we finished our second APA and shipped it to Fermilab.

Have you always liked detector design and development?
While I was working on my master’s degree, I was involved with a semester-long project at INO [the India-Based Neutrino Observatory]. It was there I learned about basic neutrino physics and particle detection, using various detectors. For these reasons, I chose to focus on neutrinos at Syracuse. 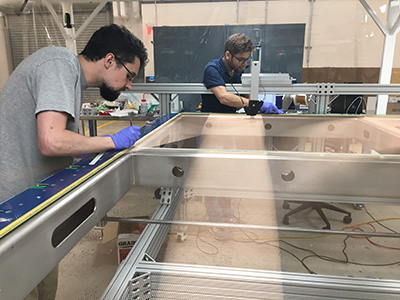 Posdoc Pip Hamilton (foreground) and Bhat work on part of an anode plane assembly, or APA, at Yale University.

What else should we know about neutrinos?
After photons, they are the most abundant particles in the Universe. We, in fact, swim in a sea of neutrinos.

Not long ago, the Standard Model [a theory describing how particles and forces relate to one another] determined that neutrinos were massless. Now we know that they not only have mass, but also change “flavor” from one type of neutrino to another. Neutrinos have a tendency not to interact with matter.

What’s your goal with this research?
To answer some big questions. I want to know what role neutrinos play in supernova explosions….Can supernova neutrinos help verify the existing neutrino oscillation and core collapse models? What can they tell us about neutrino mass hierarchy?

Do you foresee any applications?
Our knowledge of neutrinos is small, so the immediate focus is on basic research. As with most basic research, we have no idea where we will end up.

An analogy is the discovery of the electron in 1897. Back then, nobody knew that the flow of electrons created electricity—knowledge that has changed the course of history. Likewise, neutrino detectors currently monitor nuclear proliferation activity. As we learn more [about neutrinos], the possible applications in science and technology are far-reaching.

How do you like working with Associate Professor Mitch Soderberg?
His involvement with multiple neutrino experiments has enabled me to get much-needed experience in both hardware installation and physics analysis. Mitch is supportive and understanding, and his expertise has contributed greatly to my growth as a doctoral student. We’re already thinking about postdoc interviews.