The “surface of Mars” may be just a table in Link Hall and its “rocks” may only be golf balls, but the tension and excitement are nearly as high as an actual space mission. For their ECS 101 class, first-year aerospace engineering students had mere weeks to build and program “Mars rovers” capable of accomplishing specific tasks autonomously.

Before they tested their rovers, student teams had to take apart their final designs and put them back together in less than 30 minutes. Teams that could re-assemble their rovers quickly earned a head start towards a good final score. 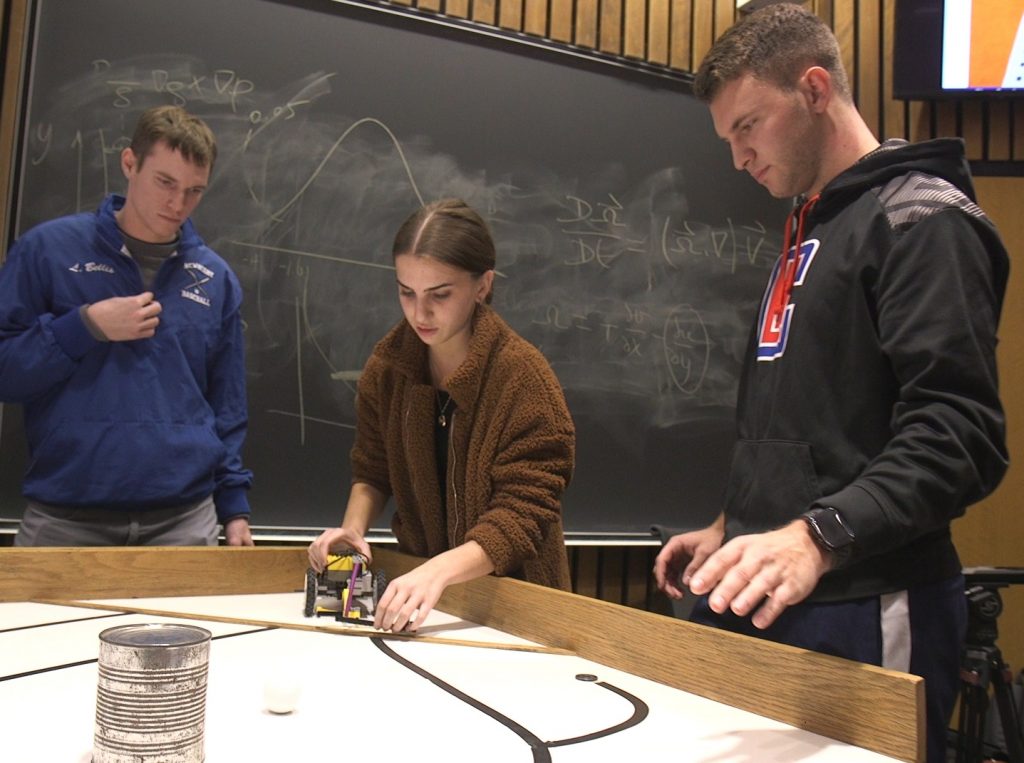 “Professor Dannenhoffer would set up a timer and then depending on how fast you do it, you get a certain amount of points,” says Stephen Leung ’22.

“We practiced a lot last night, we took it apart and put it together multiple times to make sure we kind of memorize which way the pieces went,” says Yaser Hernandez ’22. “We had drawings so we could follow along in case we needed it”

Even with drawings, re-assembling a rover is not a simple process. Hernandez and teammate Julia Comerford ’22 brought 72 pages of drawings to help them.

“It’s a bit nerve-wracking if you replace a part or you don’t know where a certain part goes. It can be a little intense,” says Taylor Davis ’22.

On the final night of class, the teams have three minutes to collect as many Mars rocks as they can, explore the surface, and drop a scientific instrument. The rover designed by teammates Lauren Mack ’22, Qualters and Nicholas Mizero Rubayiza ’22 was able to successfully capture a “rock” just moments after their time began.

“That was all I was looking for,” says Rubayiza. “The way it did it flawlessly, I was honestly proud.”

“Here you have 60 of your peers cheering you on and they are all cheering with you,” says Qualters.

“I’m hoping this is what being an engineer feels like, you are done with your stuff and you get to show it in front of everyone,” says Rubayiza.