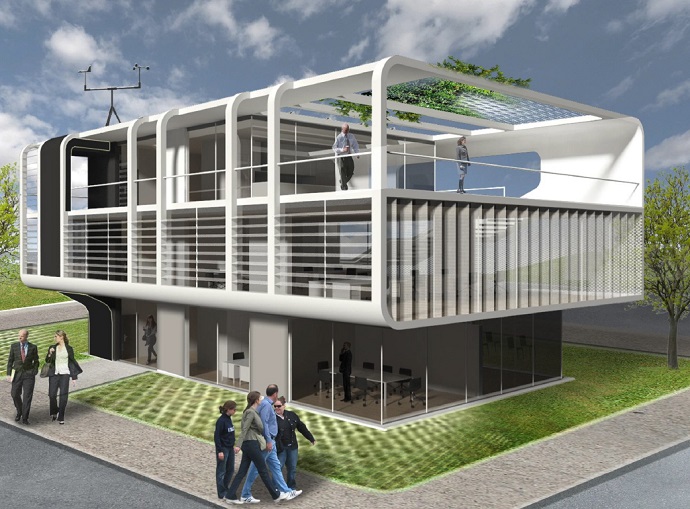 When College of Engineering and Computer Science Professor Jianshun “Jensen” Zhang set out to develop a software platform that would integrate and optimize the design of green buildings, little did he know it would lead to an international collaborative project and the creation of a demonstration building for indoor air quality (IAQ) and energy conservation in China.

“It’s quite an interesting project that is still evolving,” says Zhang, an IAQ, and material emissions expert. “Now we are getting into the building performance with measurements and feedback.”

Known as the P+ Demonstration Building, it is located in the Wujin Green Building Industry Demonstration Zone in Changzhou, a city situated in the Yangtze delta between Nanjing and Shanghai. Among its features, the 6,500-square-foot building is equipped with environmental smart-control sensors, hybrid ventilation (natural and mechanical), a solar chimney that creates natural ventilation, solar panels, photovoltaic glass and an outdoor air purification system provided by project collaborator HealthWay, a Central New York-based company and Syracuse Center of Excellence in Environmental and Energy Systems (SyracuseCoE) partner.

The three-story building has space designated for classroom training, offices and a demonstration apartment. Outside the entrance, a buffer layer introduces clean air into the building. The building, funded by the local government and completed in 2016, is one of many in the demonstration park, which introduces the green building technologies of international companies to the Chinese market.

The country’s booming construction trade and pollution concerns create ideal opportunities to implement such technologies, Zhang says. “If you make some improvement in air quality, the impacts are huge, and the potential for improvement is huge.”

According to Zhang, who heads SU’s Building Energy and Environmental Systems Laboratory in the Department of Mechanical and Aerospace Engineering, the project began as academic research more than a decade ago and has expanded through several international collaborations. With funding from the U.S. Department of Energy (DOE) and SyracuseCoE, Zhang and then School of Architecture professor P. Michael Pelken went to work developing the Virtual Design Studio (VDS), a software platform for integrated, performance-based building system design.

Originally envisioned as a teaching tool, VDS sparks collaboration between architects and engineers through simulation exercises, analysis of energy and environmental systems, and design modifications. Zhang also collaborated with Professor Menghao Qin, then director of the Center for Sustainable Building Research at Nanjing University (NJU), and now a faculty member at the Danish Technical University. Qin, Zhang, and Pelken launched a VDS summer course through Syracuse Abroad at the NJU School of Architecture and Urban Planning to train and educate SU and NJU engineering and architecture students in integrative design.

The partnerships continued to build as well. In 2015, SU and NJU established the International Center for Green Buildings and the Urban Environment, which focuses on sustainable building technology research. When the opportunity arose to employ VDS in creating the demonstration building, the P+ Design Group was formed with Pelken and Vasilena Vassilev (cofounders of P+ Studio in London), Zhang, Qin, and Charlie Cheng, a Changzhou businessman who became project construction manager. The five met via Skype every Saturday for six months to discuss the design.

Along with showcasing new green building technologies and serving as a case-study building for the VDS course, the P+ Demonstration Building is used as a research testbed for the ongoing International Energy Agency Project Annex-68 Indoor Air Quality for Low-Energy Residential Buildings, a collaboration with participants from Austria, Belgium, Canada, China, Denmark, France, Germany, and the United States. Designated by the U.S. DOE and supported by SyracuseCoE, Zhang serves as the U.S. representative.

While Zhang’s work on VDS continues with ECS doctoral students, he sees the P+ Demonstration Building and ongoing collaborations with Chinese colleagues as a small piece in the complex puzzle of improving energy conservation, controlling pollution, and reducing carbon emissions. “Ultimately,” he says, “the goal is to improve the health and well-being of the people.”