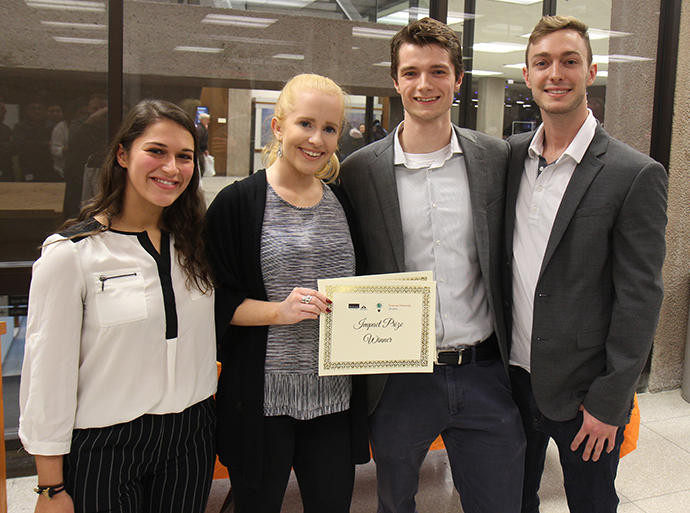 Student startup companies developed during the Invent@SU invention accelerator program took the top two prizes at the 2018 Syracuse University Impact Prize Competition organized by Blackstone Launchpad. The winners were selected for presenting the most innovative and implementable ideas to help solve civic, environmental, economic or other public challenges as part of a campuswide social entrepreneurship challenge.

Prioritage, invented by bioengineering major Angelica O’Hara ’19 and biochemistry major Ibnul Rafi ’18, took second place and $3,500. Their device, a system for first responders at mass casualty incidents, measures vital signs of multiple patients through armband units that relay data to a central onsite monitoring device. O’Hara and Rafi won first place at the New York City session of Invent@SU in the summer of 2018. McKenna Murtha ’19 of Newhouse has also joined the startup company.

Invent@SU teams Halo and FitPet were also finalists for the Impact Prize. Halo is a discreet personal safety alert device designed for college campuses, and FitPet is a pet health monitoring system.

“Participation in the Invent@SU acceleration program has consistently been a pivotal success factor for winning teams,” says Blackstone Launchpad Executive Director Linda Hartsock.  “Invent@SU provides the framework for ideation, iteration, discovery and feedback, as well as prototyping and pitching. Students who participate in Invent@SU are well prepared to work with us on next steps related to product and business model development, and take their inventions from concept to commercialization.  The Invent@SU–Blackstone LaunchPad powered by Techstars partnership is truly unique, and provides an integrated roadmap to help students succeed at being both inventors and entrepreneurs.”

This is the second year in a row that Invent@SU teams have finished at the top of the Impact Prize competition. In 2017, wearable asthma inhaler In-Spire and microfiber trapping device FibreFree were the first place teams.