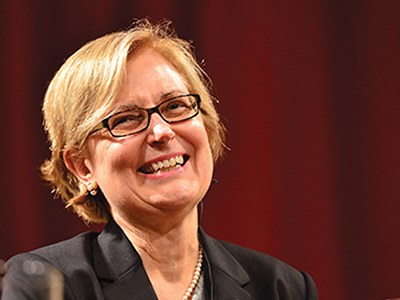 “Syracuse always was my top choice,” says Elsa Reichmanis ’72, G’75, reflecting on her decision to study chemistry. “Even though I was born and raised in Melbourne [Australia], my family and I moved to Central New York when I was eight. The thought of going to college anywhere else never crossed my mind.”

Speaking by phone from her office at Georgia Tech, the Atlanta transplant recounts her journey into chemical research, which began at AT&T Bell Laboratories (a.k.a. Bell Labs) in 1978. Reichmanis shot to fame for her pioneering work in microlithography, central to the manufacture of electronic devices. She saw the need for tiny features in integrated circuits—features smaller than the width of a human hair—and, in the process, helped spark the personal computer revolution.

For the next three decades, Reichmanis and Jersey-based Bell Labs were virtually synonymous for one another.

“The materials my group developed have been used in the fabrication of almost every modern device you can think of, from computers and cell phones to TVs and appliances,” beams the 1995 inductee of the National Academy of Engineering.

In 2008, Reichmanis moved into academia—specifically Georgia Tech, where she holds the Pete Silas Chair in Chemical Engineering and is professor of chemical and bio-molecular engineering. Since then, she has won nearly every major award in her field and has been elected to fellowships in the American Chemical Society, the Materials Research Society, the American Association for the Advancement of Science and the Royal Society of Chemistry (UK).

A&S recently caught up with Reichmanis to discuss her life and career—and the importance of women in STEM (science, technology, engineering and mathematics). 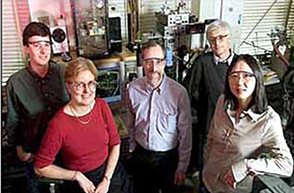 What was Bell Labs like in the Seventies?
It was incredible. I wanted to explore something that was esoteric, but had some utility to it. In those days, Bell Labs invested in optical lithography. I helped develop materials for manufacturing nanoscale computer chips that, in turn, supported the burgeoning semiconductor industry.

To be clear, optical lithography uses visible or ultraviolet light to project patterns onto a silicon wafer. These patterns make the wafer work, correct?
That’s right. … This led to my interest in a chemical substance known as a “resist,” which coats the silicon wafer and captures a desired pattern, the same way photographic paper captures an image.

I was fascinated with the manufacturability of these polymer materials and wondered how we could develop them for faster, more powerful computer chips with smaller components. We created some of the first “chemically amplified resists,” which have been used in silicon fabrication facilities all over the world.

Impressive, considering today’s semiconductors can have tens of millions of transistors.
It is amazing how far we have come. I was at Bells Labs a long time because they gave me the flexibility to work with a range of people and technologies.

For years, AT&T was a regulated monopoly, allowing for research that was not directly business-driven. At the same time, there was a lot of interaction between scientists, R&D and manufacturing.

But with the breakup of AT&T in 1984—
We had to become more competitive in the marketplace or risk becoming obsolete. It was hard to maintain the same level of research activity.

In this case, competition was not necessarily good for research.
Not always. It changed how much we invested in research activities. About 10 years ago, I decided to move into academia. 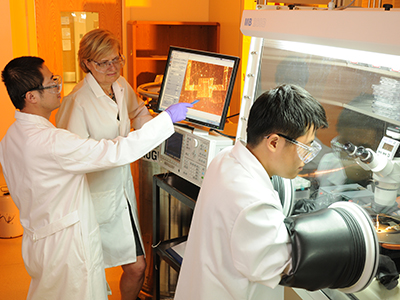 The Reichmanis Research Group at Georgia Tech works at the interface of chemical engineering, chemistry, materials science, optics and electronics.

How is academic research different from industrial research?
Building a research program at Georgia Tech has been different from how I did it at Bell Labs, where they took care of practically everything for me. There has been a lot I have had to figure out for myself, particularly with funding.

Such as?
If you want to do research in an academic environment, you have to write a proposal. There are different types of them in academia, and each one is at least 15 pages long. That’s a lot of writing.

Compare that to an industrial setting, where most proposals have to be clear, concise and to the point—three pages at the most.

How did Syracuse prepare you for both worlds?
The students I worked with [at Syracuse] were supportive and engaging. They created an environment so positive that when I went to Bell Labs, I could hardly tell the difference. I simply built and expanded on the spirit of collaboration that Syracuse had instilled in me as a student.

One of my mentors, Roger Hahn [associate professor emeritus of chemistry, who died in August 2018], was particularly good at collaborative teaching and research.

Were there many women in your program at Syracuse?
Not at the time, but a lot has changed since then. Research programs are beginning to see the value of women and underrepresented minorities, all of whom bring different viewpoints and approaches to the table. Still, academia grapples with how to recruit and retain them, particularly chemists.

If we do not foster an environment of inclusivity [in higher education], we are going to alienate segments of our population. This can lead to missed opportunities—innovations and inventions that never get off the ground.

Was the size of Syracuse’s chemistry department an asset or a hindrance?
I loved it. Everybody knew me and supported what I did. Being younger than most of my peers and having parents who did not want me to go away to school, I felt like Syracuse made a lot of sense.

Your long list of honors and awards includes an induction into the National Academy of Engineering. What role do they and other associations have in promoting science literacy?
The National Academies [of Sciences, Engineering and Medicine] provide nonpartisan, objective advice on policies and practices—from narrow, scientific ones to those of broad, societal concern.

I am interested in creating an inclusive environment in chemistry that is supportive of diversity, where diversity is broadly defined. One area we need to think about, which is a microcosm of what is going on in the greater STEM community, relates to harassment. For instance, the National Academies produced a report earlier this year, revealing that 50 percent of all women experience some form of harassment in school or at work.

We need to work together as professionals and organizations, such as the National Academies and the American Chemical Society [of which Reichmanis was president in 2003], to create environments that allow everyone to realize their potential and be successful.

What else is important to you?
I am interested in products and processes that provide for a sustainable future. By “sustainable,” I am referring to not only the environment, but also human health and the economy. … What good is green chemistry if it is not profitable or cost-effective or if it takes advantage of a particular group of people?

Perhaps the only thing as important as science literacy is social science literacy. U.S. scientists need to understand the economics of decision making and its effect on the local and global community. Everything is interrelated.