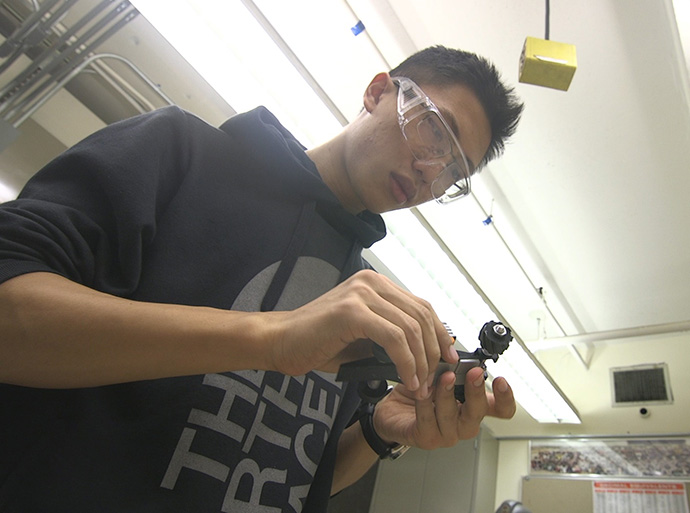 Many cars are defined by their horsepower but that is only one aspect of the engineering and design process. Freshmen mechanical engineering students in Professor Michelle Blum’s ECS 101 class designed mini-cars that were more precise than powerful.

“We were given the 3D printed chassis for the car, told we could modify it in any way possible,” says Erin Beaudoin ’22.

“And using tools that were in the shop and the materials we were provided we had to make a car that would run on a rubber band to a certain distance,” says Aidan Mickleburgh ’22. “We didn’t know what the distance was so we had to try to not only make this car run but in a way that was predictable.”

“To add control you need traction on the wheels and you need to add weight to the car,” says Tydre Bell ’22.

“Because it had to move but it had to make it move in such a way that you could get it as close to the point as possible,” says Mickleburgh.

“Consistency is key. Getting your rubber band to be consistent with each shot,” says Beaudoin.

“The whole class worked as a team because we gave each other advice,” says Bell.

“I put a lot of time into testing, knowing how many times I spin it—it will give me this one distance,” says Jagger Kachmaryk ’22. “So when it comes time to race, you just pull out a sheet and say that’s how many times I’m spinning it—line it up and go.”

“I think the biggest takeaway for me was planning can work but you have to be ready to just try it again,” says Mickleburgh.

“Being freshman, just getting us in here, 3D printing, us working with machines, that’s awesome in itself,” says Kachmaryk. I just think this is kind of like the setting stone for all the projects we are going to do going forward, how to approach it.”

“I think it’s pretty cool actually—I can’t wait until it is my career,” says Bell.