An international team of earth scientists has linked the establishment of the Mekong River to a period of major intensification of the Asian monsoon during the middle Miocene, about 17 million years ago, findings that supplant the assumption that the river incised in response to tectonic causes. Their findings are the subject of a paper published in Nature Geoscience on Oct. 15. 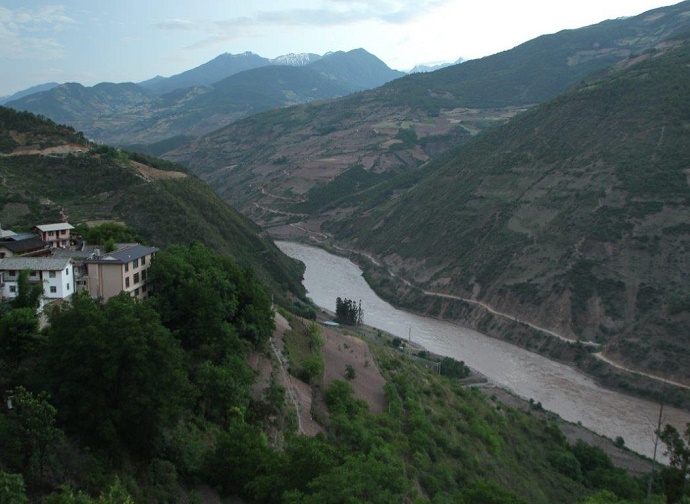 Gregory Hoke, associate professor and associate chair of Earth sciences, and recent SU doctoral student Gregory Ruetenik, now a post-doctoral researcher at the University of Wisconsin, co-authored the article with colleagues from China, France, Sweden, Australia, and the United States. Hoke’s initial collaboration with first author Jungsheng Nie was co-editing a special volume on the growth of the Tibetan Plateau during the Cenozoic.

The Mekong River is the longest in Southeast Asia and the tenth largest worldwide in terms of water volume. Originating in the Tibetan Plateau, the Mekong runs through China, Myanmar, Laos, Thailand, Cambodia and Vietnam. The Chinese portion of the river (Lancang Jiang) occupies a spectacular canyon that is between 1-2 kilometers deep relative to the surrounding landscape.

“When the upper half of that river was established and at what point it incised the canyon it occupies today, as well as whether it was influenced by climate or by tectonics, has been debated by geologists for the last quarter century,” says Hoke. “Our work establishes when major canyon incision began and identifies the most likely mechanism responsible for that incision: an intensification of the Asian monsoon during the warmest period over the last 23 million years, the Middle Miocene climate optimum.”

River incision is the natural process by which a river cuts downward into its bed, deepening the active channel. “In most cases, you can attribute incision to some sort of some change in the overall relief of a landscape, which is typically interpreted to be in response to a tectonic influence,” says Hoke.

The standard interpretation for river incision of the Mekong and adjacent Yangtze basins had been a response to topographic growth of the Tibetan Plateau. However, a recent string of studies have determined that the southeastern margin of Tibet was already at or near modern elevations by 40 million years ago, throwing a monkey wrench into that hypothesis.

Using thermochronology of apatite minerals extracted from bedrock samples collected along the walls of the river canyon, the scientists were able to numerically model the cooling history of the rock as the river incised, which revealed synchronous downcutting at 15-17 million years along the entire river. Synchronous downcutting points towards a non-tectonic cause for incision. Ruetenik modeled whether or not a stronger monsoon was capable of achieving the magnitude of downcutting over the relatively short duration of the middle Miocene climate optimum using landscape models he developed during his SU doctoral study. According to Hoke, “This solves how river incision occurred in the absence of any clear pulse of plateau growth along the southeast margin of Tibet. In essence, an enhanced monsoon did a tremendous amount of work sawing through the landscape during the middle Miocene climate optimum.”

Previously, Hoke studied buried river sands in cave deposits to reconstruct the incision history of the Yangtze river, the next river to the east of the Mekong. “We found a sequence of ages that look similar to those from the thermochrometers in the Mekong,” he says of his findings, published in Geophysical Research Letters in 2016. He next hopes subsequent studies will be able to extend the results from this new Nature Geoscience paper to the three other big rivers that drain the southeastern margin of the Tibetan Plateau.