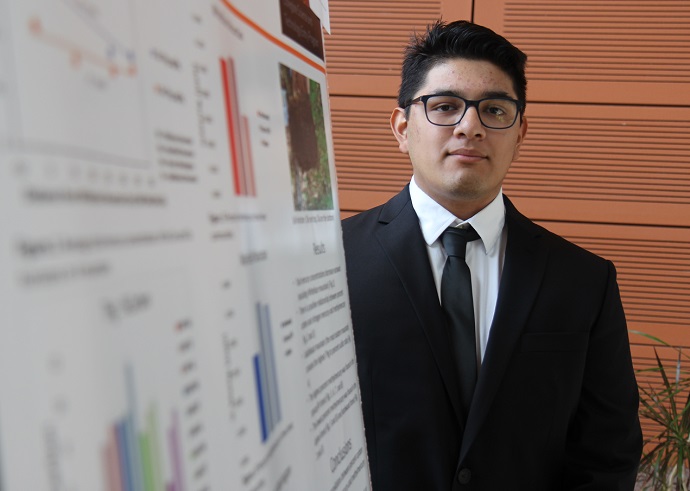 From the moment he arrived on the Syracuse University campus, Connor Gonzalez ’20 was looking to get involved in research. During his freshman year, he started visiting the Student Success Center in Link Hall.

“I asked how I could get involved, what opportunities were available in the College of Engineering and Computer Science,” says Gonzalez.

The Student Success Center connected him with laboratory manager Mario Montesdeoca and Gonzalez was given an opportunity to analyze samples in the Link Hall environmental engineering laboratories.

“He loves to help and he goes out of his way to help people, ” says Gonzalez of Montesdeoca.

Near the end of his freshman year, he was also offered a chance to stay in Syracuse for the summer and develop an environmental engineering research project in the research laboratory of Charles T. Driscoll Jr., University Professor and Director of the Center for Environmental Systems Engineering.

“I thought, what a great opportunity to be mentored by one of the top professor at SU – why not?” says Gonzalez.

“Of the four mountains we are trying to figure out what trends there are in each of the mountains and do different elevations and types of forest play a role,” says Gonzalez.

Before starting his research, Gonzalez had speculated that the uppermost forest would contain the most mercury contamination but the data showed a different result.

“We saw that in all four mountains that the middle elevation forests, the spruce and fir forests, contained the most amount of mercury,” says Gonzalez.

Professor Driscoll was impressed by the caliber of research Gonzalez had accomplished as a rising sophomore and encouraged him enter the statewide CSTEP Research Poster Competition.

Gonzalez presented his research during the CSTEP Conference April 13-15 at the Sagamore Hotel on Lake George and won first place in the Environmental and Earth Science category.

“You always hope for first place but you never actually expect to get it,” says Gonzalez. “I was very shocked but I didn’t want to seem too shocked since I was confident in my poster.”

Gonzalez continued his research during summer 2018 and hopes to present an updated version at the Society of Hispanic Professional Engineers national conference held in Cleveland, OH this November.