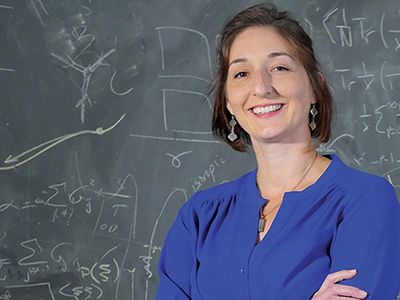 Lisa Manning, associate professor of physics in the College of Arts and Sciences, is included in Science News’ SN 10: Scientists to Watch. For the fourth year, Science News is spotlighting 10 early- and mid-career scientists on their way to widespread acclaim for tackling the big questions facing science and society.

Manning, 38, describes cells’ behavior in terms of the mechanical forces they exert on one another. Her approach has led to a new understanding of a whole host of biological processes that involve cells on the move, including embryonic development, wound healing and even asthma and cancer.

“Forces at the cellular scale are important for properties of tissues,” says physicist Jean Carlson of the University of California, Santa Barbara, who was Manning’s graduate adviser. “Lisa has been a real leader in thinking that way.”

Each scientist included in the SN 10 was nominated by a Nobel laureate or recently elected member of the National Academy of Sciences. All are age 40 or under and were selected by Science News staff for their potential to shape the science of the future.

“Each year, I am more and more impressed by the scientists who are selected to this prestigious list,” says Maya Ajmera, president and CEO of the Society for Science & the Public and publisher of Science News. “These scientists are making an enormous impact. I congratulate all the members of the SN 10 class of 2018.”

Nancy Shute, editor in chief of Science News, adds, “It’s not surprising that members of the SN 10 class of 2018 are looking to other disciplines to find solutions to some of our world’s grandest challenges. Today’s best scientists understand that they need to think beyond boundaries and what has been done before. There’s a fearlessness and drive that made these researchers stand out.”