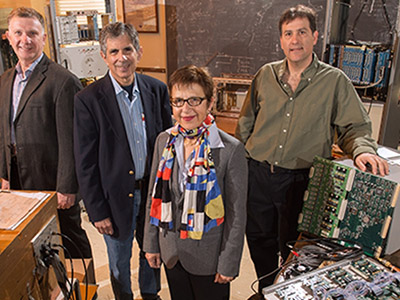 The American Physical Society (APS) is recognizing a professor in the College of Arts and Sciences (A&S) for his contributions to particle physics.

Sheldon Stone, Distinguished Professor of Physics, is the 2019 recipient of the APS’ prestigious W.K.H. Panofksy Prize in Experimental Particle Physics.

The prize consists of $10,000, a travel allowance to the meeting where Stone will be honored and a certificate citing his ongoing research into the fundamental forces and particles in the universe.

“We applaud [Stone’s] transformative contributions to flavor physics and hadron spectroscopy, in particular through his intellectual leadership on detector construction and analysis on the CLEO and Large Hadron Collider beauty [LHCb] experiments, and for the long-standing, deeply influential advocacy for flavor physics at hadron colliders,” says APS President Roger W. Falcone.

Stone hunts for forces in the universe that help answer astrophysics’ most persistent questions, such as “Why is there more matter than antimatter in the universe?”

“Every particle has a corresponding antiparticle, identical in every way, but with an opposite charge,” says Stone, a decorated APS Fellow. “When matter and antimatter come into contact, they annihilate each other in a burst of energy—much like what happened in the Big Bang. I want to know why matter has become so dominant.”

Stone also excels in hadron spectroscopy, a subfield of physics studying the quark content of hadrons and their masses.

Under his leadership, the 20-member High-Energy Physics (HEP) Group in A&S has garnered international acclaim for making inroads into new physics—that is, physics beyond the Standard Model, a decades-old theory describing the universe’s fundamental forces and particles. 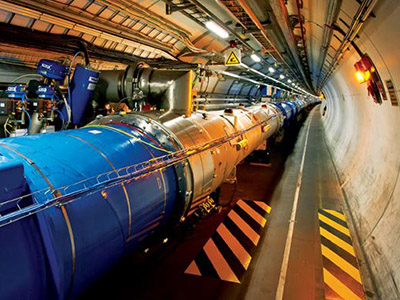 HEP members often divide their time between Syracuse, where equipment is designed, developed, built and tested, and the CERN physics laboratory in Geneva, Switzerland, where experiments are carried out. CERN is home to the Large Hadron Collider (LHC), the world’s biggest, most powerful particle accelerator.

“The nucleus of an atom is made up of protons and neutrons, each of which contains three quarks. We produce these quarks and other heavier ones with the LHC,” he says.

HEP is interested in how heavier quarks decay, or transform, into lighter ones. Considerable emphasis is on three of the six kinds of quarks—the peculiarly named “top,” or “t” quark; the “bottom,” “beauty” or “b” quark; and the “charm,” or “c” quark.

“Studying the decays of these heavy quarks may help us understand what happened after the Big Bang, nearly 14 billion years ago,” Stone adds.

At CERN, the LHC hurls beams of protons at one another at nearly the speed of light. HEP combs the debris from these collisions for clues to new or yet-to-be-detected forces in the universe.

Since 2014, the LHCb experiment has turned the field on its ear with discoveries of various hadrons, including two rare pentaquarks (a particle with four quarks and one antiquark), a tetraquark (two quarks and two antiquarks) and several never-before-seen baryons (three quarks).

A unifying characteristic of these discoveries is the presence of a “b” or “c” quark. “We cannot discern the presence of ‘b’ quarks until they decay into something else,” Stone says.

Ian Shipsey, the Henry Moseley Centenary Professor of Experimental Physics at the University of Oxford, praises Stone’s understanding of the instrumentation used to record the interactions of elementary particles. “Indeed, he has built much of it,” says Shipsey, also head of Oxford’s physics department. “His knowledge is matched by a remarkable intuition and tenacity that have enabled him to discover new particles”—from the discovery of the B meson and the first definitive observation of the Ds meson to the recent discovery of pentaquark states.

In addition to conducting data analysis, HEP is spearheading the construction of the Upstream Tracker (UT). This new device, scheduled for completion in 2020, will replace part of the LHCb’s existing charged particle tracker at CERN.

“The UT will enhance the capabilities of the experiment’s 10 sub-detectors, which also are being upgraded,” says Stone, adding that Professor Marina Artuso is overseeing the UT Project.

Stone is optimistic about the upgrade, which expects to increase the amount of data that LHCb can handle by factors of five to 10. “Improved luminosity will permit more accurate measurements of fundamental particles, and will enable observations of rare processes occurring below the current sensitivity level,” he explains.

Also excited is Guy Wilkinson, a founding member and former spokesperson of the LHCb experiment. He says HEP has been a “valued participant,” long before the LHC delivered its first collisions in 2009.

“Sheldon has been an absolutely key figure in the exploration of flavor physics,” says the Oxford professor, referring to the different types, or “flavors,” of quarks and leptons. “He has shown great vision and leadership in the development of new experiments and experimental techniques, and has played a central role in many important discoveries.”

Wilkinson points out HEP’s “exceedingly strong track record” in producing important, high-profile publications—most of which explain how protons and neutrons bind together, and how matter is constituted. “Don’t be fooled by the group’s size. They are an impressive bunch,” he says, referring to HEP’s relatively small collection of two-dozen professors, research assistants and students.

Prior to coming to Syracuse in 1991, Stone held faculty positions at Cornell and Vanderbilt universities. He also has served as co-spokesperson for the CLEO experiment at Cornell and the BTeV collaboration at the Fermi National Accelerator Laboratory (Fermilab) outside of Chicago.

Stone has authored or co-authored hundreds of research articles, and has headlined conferences all over the world. He earned a Ph.D. in physics from the University of Rochester.

Joel Butler, a Distinguished Scientist at Fermilab, says Stone’s expertise in data analysis and detector design, combined with an “uncommon understanding” of the theory behind them, yields innovative search strategies and visionary experimental approaches.

“Sheldon has devoted his career to studying the decays of heavy quarks, especially ‘b’ quarks, with the goal of seeing deviations from the Standard Model of particle physics that would indicate new phenomena in nature,” says Butler, also spokesperson of the Compact Muon Solenoid (CMS) experiment at CERN. “This effort has the potential to see evidence for new forces and particles that cannot be directly observed, even with our most energetic colliders.”

The Panofsky Prize is named for the late German-American physicist who founded and directed the Stanford Linear Accelerator Center (SLAC). “He profoundly impacted elementary particle physics as a researcher, a machine builder and an administrator of basic research,” says Stone, who performed several experiments at SLAC during Panofsky’s 46-year tenure, which began in 1961.

“Sheldon has been at the center of many key developments, has contributed extensively to the literature defining important issues in the field, and has led the development of novel techniques in both instrumentation and analysis,” says the eminent theoretical physicist. “He has built a formidable experimental group at Syracuse, nourishing the intellectual growth of his young colleagues.”

APS is a nonprofit membership organization working to advance and diffuse the knowledge of physics through its outstanding research journals; scientific meetings; and education, outreach, advocacy and international activities. The organization represents more than 55,000 members, including physicists in academia, national laboratories and industry in the United States and throughout the world.