A New Way to Count Qubits

Researchers at Syracuse University, working with collaborators at the University of Wisconsin (UW)-Madison, have developed a new technique for measuring the state of quantum bits, or qubits, in a quantum computer.

Their findings are the subject of an article in Science magazine (American Association for the Advancement of Science, 2018), which elaborates on the experimental efforts involved with creating such a technique. 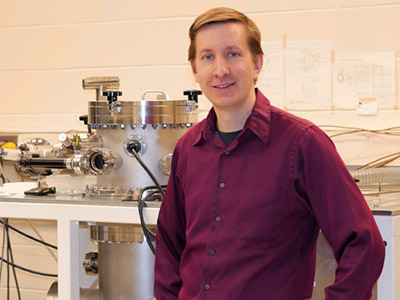 Britton Plourde in his lab at Syracuse University.

The Plourde Group—led by Britton Plourde, professor of physics in the College of Arts and Sciences (A&S)—specializes in the fabrication of superconducting devices and their measurement at low temperatures.

Much of their work involves qubits, which are systems that follow the strange laws of quantum mechanics. These laws enable qubits to exist in superpositions of their two states (zero and one), in contrast to digital bits in conventional computers that exist in a single state.

Plourde says that superposition, when combined with entanglement (“another counterintuitive aspect of quantum mechanics”), leads to the possibility of quantum algorithms with myriad applications.

“These algorithms can tackle certain problems that are impossible to solve on today’s most powerful supercomputers,” he explains. “Potential areas impacted by quantum information processing include pharmaceutical development, materials science and cryptography.”

Intensive, ongoing industrial-scale efforts by teams at Google and IBM have recently led to quantum processors with approximately 50 qubits. These qubits consist of superconducting microwave circuits cooled to temperatures near absolute zero.

Building a quantum computer powerful enough to tackle important problems, however, will require at least several hundreds of qubits—likely many more, Plourde says.

The current state-of-the-art approach to measuring qubits involves low-noise cryogenic amplifiers and substantial room-temperature microwave hardware and electronics, all of which are difficult to scale up to significantly larger qubit arrays. The approach outlined in Science takes a different tack.

“We focus on detecting microwave photons,” says Plourde, also editor in chief of IEEE Transactions on Applied Superconductivity (Institute of Electrical and Electronics Engineers). “Our approach replaces the need for a cryogenic amplifier and could be extended, in a straightforward way, toward eliminating much of the required room-temperature hardware, as well.”

Plourde says the technique co-developed at SU and UW-Madison could eventually allow for scaling to quantum processors with millions of qubits. This process is the subject of a previous article by Plourde and his collaborators in Quantum Science and Technology (IOP Publishing, 2018).

An A&S faculty member since 2005, Plourde is a recipient of the IBM Faculty Award and the National Science Foundation’s CAREER Award. He earned a Ph.D. in physics at the University of Illinois at Urbana-Champaign and completed a postdoctoral research fellowship at the University of California, Berkeley.

For the first time in Syracuse University’s history, a department has received a prestigious S10 Instrumentation Grant from the National Institutes of Health. The S10 program, which supports the purchase of high-tech instruments to enhance research of NIH investigators, funded…

Crude oil production and natural gas withdrawals in the United States have lessened the country’s dependence on foreign oil and provided financial relief to U.S. consumers, but have also raised longstanding concerns about environmental damage, such as groundwater contamination. A…