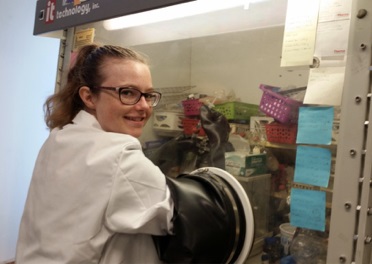 Marina Cousins, a high school senior working in the lab of College of Arts and Sciences Dean Karin Ruhlandt, participated in the Intel International Science and Engineering Fair in Pittsburgh, Pennsylvania, in May.

A high school student working in the lab of College of Arts and Sciences Dean Karin Ruhlandt participated in the Intel International Science and Engineering Fair in Pittsburgh, Pennsylvania, in May.

Marina Cousins, a senior at Manlius-Pebble Hill School, was selected to attend in March after winning top honors at the 39th annual Central New York Science and Engineering Fair, organized by the Milton J. Rubenstein Museum of Science & Technology. She was one of three winners of an all-expense-paid trip to the Pittsburgh event.

Cousins, who worked in Distinguished Professor Ruhlandt’s lab, had her work overseen by Research Assistant Professor Miriam Gillett-Kunnath and presented on “The Synthesis and Characterization of Novel Heteroleptic Alkaline Earth Metal Compounds.”

“Marina is a dynamic student who we were happy to mentor and engage her in the work being conducted in the lab,” Ruhlandt says. “She has tremendous initiative and a bright future ahead, as shown by her work in STEM and the distinguished recognitions she has received. We are very proud of her.”

Cousins contacted Ruhlandt last year about working in her lab during the summer, and Gillett-Kunnath interviewed her for a position.

“I remember a shy and humble individual observing everything around her,” Gillett-Kunnath says. “I was later blasted with a long email asking a plethora of questions about research projects, timelines, how to prepare, what to read and that she would really, really like to work with us.”

Gillett-Kunnath says Cousins’ questions and her enthusiasm and interest in the research stood out to her. “It brings a smile as I recall this because this is truly who Marina is—she shines among all others and is one of the best students that I have had the privilege to work with,” she says. 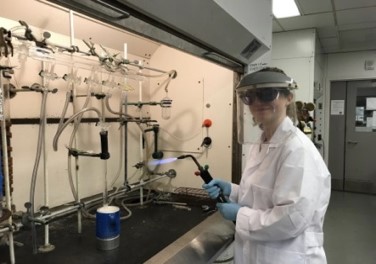 The goal of Marina Cousins’ research is to create a compound that can efficiently deposit a thin film of metal oxide based on calcium, strontium or barium—that can be used in semiconductors.

Cousins connected with Ruhlandt after hearing about her research from Ruhlandt’s daughter.

“I am very interested in the sciences and finding new and novel solutions to problems,” Cousins says. “Therefore, while chemistry is not in my direct line of interest, which is engineering, I am still fascinated by the research I am doing. And I love learning new things in the lab.”

Her work in Ruhlandt’s research lab and her ability to quickly learn and master new knowledge led to Ruhlandt and Gillett-Kunnath allowing her to start her own project, a graduate-level thesis project, in the lab.

“Her excitement and passion for discovery did not stop there as she convinced us that she needed to pursue this incredibly difficult project as her senior thesis project,” Gillett-Kunnath says. “We decided to accept Marina back into the lab for her senior year and assist in mentoring her in her senior project—the first for MPH—simply because we believe in her and know she has what it takes.”

Cousins worked in the lab Thursdays after school and Saturday mornings on a project they designed together. “Marina was interested in MOCVD as it has both chemistry and engineering applications—something she wants to pursue as an undergrad,” Gillett-Kunnath says. MOCVD, metal organic chemical vapor deposition, is a technology that deposits layers of atoms to be used in a semiconductor.

The goal of Cousins’ research is to create a compound that can efficiently deposit a thin film of metal oxide—based on calcium, strontium or barium—that can be used in semiconductors.

“My research focuses mainly on the synthesis of the compounds that will deposit the metal oxide, and we were looking for compounds with good properties for metal organic chemical vapor deposition, such as high volatility, low melting point and a low tendency towards aggregation,” Cousins says. “If we find a compound that is better than what is currently being used, it could be critical to further development in semiconductors and electronics.”

Cousins also presented at the 2017 Syracuse University Research Experience for Undergraduates poster session and the poster session at the American Chemical Society National Meeting in New Orleans in March. At the Central New York Science and Engineering Fair, she earned three awards and high honors, along with the invite to Pittsburgh.

“I have done science fair projects in the past and won awards, so I had high hopes for this year, but I was completely blown away by the opportunity to go to the international STEM fair,” Cousins says. “I was excited to present with so many other incredible students and to learn a little bit more about what other innovative high school students are working on.”

This summer, Cousins, who will head to Union College for engineering this fall, will continue working in the lab to finish up the research, collaborate on publishing papers, and mentor new high school students.