Known as “blue boxes,” the compact blue mini-planes designed by Binghamton New York engineer Edwin Link in 1929 were the first commercially available flight simulators. To build them, Link used his experience working for his family’s piano and organ business. 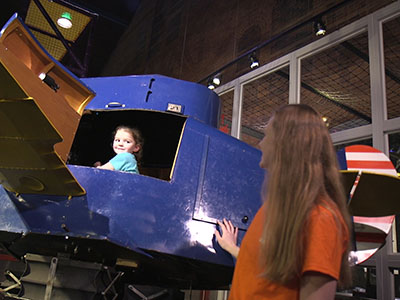 A child enjoys the Link Flight Trainer at the M.O.S.T. in downtown Syracuse.

“If you notice, there are four bellows underneath the airplane that are on the octagon table and they tilt the plane from left to right, forward to backward to give you all the pitch and roll sequences of a real aircraft,” says Terry Loretz from the Milton J. Rubenstein Museum of Science and Technology (M.O.S.T.) in downtown Syracuse. “It turns on two player pianos, which the mechanism you can actually see is turning the plane.”

The first customers were amusement parks, but then the Army Air Corps realized it needed a way to train air mail pilots to fly in poor conditions using only instruments.

“He sold in the 1940s approximately 10,000 to these to the military services,” says Loretz. “Anybody that flew a WW2 American-built aircraft, whether it was a fighter or a bomber, had to go through this prescribed procedure before they set foot in a flying plane.”

The Link Flight Trainer at the M.O.S.T. was donated by the College of Engineering and Computer Science. Associate Dean Earl Kletsky oversaw its restoration.

“The people from SU went down in 1987 to an air force base in Texas, brought it back in a basket case and totally restored, repainted, repaired, rebuilt everything on here and had it back 100 percent operational,” says Loretz.

The instructor’s station was also restored. An instructor could tell a trainee what course they should fly, and then a motorized claw would track it on a map.

“And leave a red line where his course was,” says Loretz. “So if he told him he wanted him to land in a certain place, he could actually change the course and line up on that runway.”

For E-Week 2018, aerospace engineering senior Nicole Roslan and other current SU students helped kids experience what flight training was like in the ’30s and ’40s.

“It is so accessible, and really anyone can fly it and learn more about aviation,” says Roslan. “They get to turn the plane left and right and maybe pitch it nose down and nose up—every time they go around they have a huge smile on their face.”

“We believe this is the only Link trainer that children can fly. Most of them are behind glass or not accessible to the public,” says Loretz.

Link Hall at Syracuse University is named after Edwin Link. The current flight simulator on the second floor is a full motion simulator with digital screens—one of only a handful of full motion digital simulators on a university campus.

Roslan has flown in both models and believes the Link Trainer provided the basis for all modern flight training.

“It’s really cool. Both simulators essentially work the same way if you look at it. This one uses those bellows, but the one in Link uses electric motors. It is the same type of technology, just more advanced,” says Roslan.

There are only believed to be 132 surviving original Link Flight Trainers in the world. The Link Trainer at the M.O.S.T. in Syracuse is available for the public to experience.