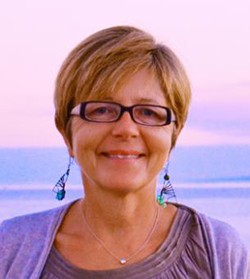 Cristina Marchetti, the William R. Kenan Jr. Professor and Distinguished Professor of Physics in the College of Arts and Sciences, has been appointed director of the University’s Soft and Living Matter Program. Marchetti, who was nominated by her colleagues in the program and appointed last month by Dean Karin Ruhlandt, will serve a three-year term.

The program has now expanded to increase participation and buy-in from faculty across multiple departments, schools and colleges, and local institutions. “We wanted the output of the program to be much more than the sum of its parts,” says Marchetti. The group changed the name to Soft and Living Matter Program to better reflect the expanded focus, and it implemented a new administrative structure and assessment protocols.

As program director, Marchetti, who has also chaired the American Physical Society’s Topical Group on Soft Matter, will oversee the program’s operations and intellectual progress and monitor research advancements and effectiveness of educational/outreach activities. She will be aided by an executive committee whose composition—including professors Lisa Manning of physics, Mat Maye of chemistry and Shikha Nangia of biomedical and chemical engineering— reflects the broad interdisciplinary span of the program.

“Cristina is an international leader in the area of soft matter and one of the college’s most recognized academic stars,” says Dean Ruhlandt. “She is an incredible asset to this program, and she was the natural choice to lead the program to even greater distinction.”

Marchetti says, “As director, I would like for the program to be able to establish itself as a center that will generate and support collaborative research projects and attract external funding. The goal is to make Syracuse University recognized nationally and internationally as one of the leading hubs for research on soft and living materials.”

The program has already established a number of new initiatives, such as travel grants for graduate students and a Distinguished Visitor Program. It also plans to build on the IGERT Soft Interfaces Program to grow various educational activities, including interdisciplinary courses and professional skills training for students at every stage of their academic career.

Faculty, postdocs, graduate and undergraduate students participating in the program today come from a range of disciplines, including physics, chemistry, biology, mathematics, biomedical and chemical engineering, and mechanical and aerospace engineering. Several faculty from Upstate Medical University are associate members of the program.

These multidisciplinary teams are organized into research thrusts that members feel Syracuse University can become world renowned for, and that draw on current strengths, combining faculty, student, staff and facility capability and know how. The first topics include:

The work on active and living matter has potential implications for better understanding how wounds heal and cancers metastasize and for the design of smart and reconfigurable materials.

While these are current focus areas, Marchetti says there is potential for expansion to new topics as new synergies emerge.