Zhen Ma, biomedical and chemical engineering professor in the College of Engineering and Computer Science, was selected as the winner of the 2017 Lush Prize for Young Researcher (Americas). 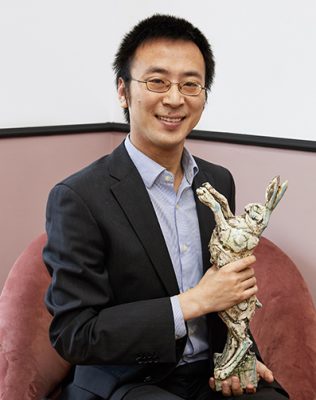 Zhen Ma with his Lush Prize

The Lush Prize, now in its sixth year, is a collaboration between cosmetics company Lush and research organization Ethical Consumer. As the largest prize fund for the complete replacement of animal experiments, it funds projects working to end animal research in toxicology (chemical testing).

“This year nominations for the Lush Prize were received from 38 countries, by far the highest so far. Judges continue to be impressed with not only the high quality of science and campaign initiatives happening globally to replace animal tests, but also the integrity of young researchers who want to avoid using animals for both ethical and scientific reasons. We are delighted to once again be able to support projects across the world, not only financially but by raising their profile and showing governments, scientists and the public that we all need to co-operate to replace animal testing with superior, human-relevant, alternatives,” says Lush Prize spokesperson Craig Redmond.

“I’m so excited that Lush Prize can recognize my work and contribution to this field and fight for animal-free research,” says Ma. “Several colleagues are using the same stem cell organoid technology to pursue human-specific research for diabetes, neural degenerative diseases and drug toxicity. The Lush Prize not only helps financially fund my research at Syracuse Biomaterials Institute, but also helps me make the connections throughout the whole world.”

Ma and all the winners received their prizes at the Lush Prize Awards Ceremony in London on Nov. 10.