The students in the Orange Hacker’s Association are “white hat hackers”—hackers who test cybersecurity programs not to break them, but to help make them safer.

“People think of it as a very bad thing, but actually a hacker is just someone who knows a system very well,” says master’s student Dhruv Verma. 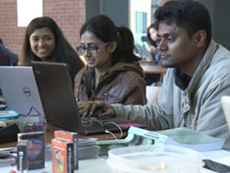 The Orange Hackers practice their skills.

“Only if you try, you know where you fail. The more you attack a surface, you know where the loophole is and you can keep correcting it,” says master’s student Trishna Thrinath.

The student group is advised by College of Engineering and Computer Science Professor Kevin Du, one of the world’s leading cybersecurity researchers.

“With Professor Kevin Du, he is synonymous with cyber security … and we are very lucky to be under his guidance,” says Thrinath. “When he is there, we were thinking, why not have a club everybody can join in?”

The Orange Hackers had a strong showing at the CyberSeed Security Competition hosted by the University of Connecticut in October.

“We not only have to protect ours, we have to find the loophole in the other teams,” says Thrinath.

“We ended up coming in second and got a special award for best offensive team,” says Verma.

“There are about 3,300 people that participate in that. So again, Orange Hackers are doing pretty well,” says Verma.

The Orange Hackers Association is looking for new members, and not just computer science or engineering students.

“Our tagline is teach, learn and collaborate. So we want to share information we that have, learn with other people, connect with other professionals. Basically create a network of security interested people,” says Verma.

“I know students from other schools which is not even related to engineering who want to learn about security. Hacking is good, hacking is what keeps you safe,” says Thrinath.

If you are interested in joining, you can e-mail the Orange Hacker’s Association at OHA.syr@gmail.com or come to a meeting Tuesdays at 7:00pm at the Center for Science and Technology (CST) Room 4-201.