As Neil Armstrong took his infamous “one small step” onto the surface of the moon, Mary Spio’s world took a giant leap forward. Decades removed from the actual event, as a child in Ghana, Spio watched a lunar landing documentary on a tiny flickering black and white TV while a military coup raged outside her door. 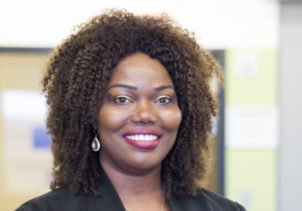 “The impact that television had was profound. It was a window that opened my aperture of thought and made me think, ‘Wow, maybe there is something beyond what I am seeing now,’” says Spio.

Born in Syracuse but raised in Ghana, Spio was compelled to return to the United States to escape the turmoil and pursue opportunities that would prepare her to accomplish something as seismic as putting a man on the moon.

After serving the U.S. Air Force, Spio earned a bachelor’s degree in electrical engineering from the College of Engineering & Computer Science, then a master’s degree from Georgia Institute of Technology. She became a deep space engineer for Boeing, designing the digital technology now widely used for distributing major motion pictures, the first of which was “Star Wars Episode II.” She also became an author, a screenwriter and a Department of State ambassador of innovation and entrepreneurship.

One day, Spio’s success led her to a fateful experience at the offices of Facebook. It was there that she first experienced what it was like to step into another world through virtual reality. Only it wasn’t a world—it was a moon. The virtual reality module put her in the moonboots of Neil Armstrong, bounding across the lunar surface.

“I put the headset on and I was a kid again in front of the TV. This time I didn’t need to wonder what it felt like because I could actually feel it. I could look down and all around. It had a profound impact because I knew that the media had taken a turn again,” explains Spio. “We’d gone from watching a video to being able to live inside of the experience.”

“I wanted to do everything with VR. I wanted to watch movies. I wanted to watch concerts. I wanted to learn,” says Spio. “It became my mission to create content for virtual reality beyond what existed. And I knew that if we could literally change the world that surrounds us, we could bring anything to the entire world. Now I don’t need to travel elsewhere to experience something different. This could be a vehicle for compassion and empathy. I knew I was looking at something rather phenomenal and transformative.”

Fast forward to today and Spio is the founder, CEO and president of CEEK VR Inc., a developer of innovative virtual and augmented reality content solutions and experiences for entertainment and education. It has created content and technologies for the likes of Universal Music Group, Miami Children’s Hospital and Berkshire Hathaway’s Richline. It’s even partnered with Apple to provide an iTunes gift code with exclusive access to music and concert footage with the purchase of CEEK’s virtual reality bundle of equipment and content. This is the very first virtual reality promotional partnership for iTunes.

“Our focus is on everyday content—movies, music, shopping, studying. We create content for the everyday user, not just hardcore gamers. I want to be able to contribute in positive ways.”

For all its advancements, the virtual reality industry remains a fragmented place. It is currently spread across many applications, including desktop, mobile, console and web, each requiring various equipment and software. This can be intimidating for people who just want to consume content.

CEEK’s technology enables content creators to develop and distribute content across all mobile devices and operating systems. The company also focuses on advancing the mobile virtual reality experience on its headset—creating great graphics, programs and applications you can’t get anywhere else.

High-quality virtual reality experiences are still so new, it can be difficult for the average person to understand how they will be useful in their own lives. In addition to watching movies and concerts, there are many unexpected ways virtual reality can be used. CEEK developed a virtual shopping experience for Berkshire Hathaway. If you are looking for a new place to live, you may one day tour a house or apartment virtually. One day you’ll even be able to try on clothes and purchase them virtually.

Spio believes that that virtual reality’s biggest impact will be in education and healthcare.

“You can teach people who are worlds away. There are many cameras that allow for real-time streaming to mobile. You could have a college professor here at Syracuse in front of a streaming camera, and someone in Tokyo or Ghana can put on their virtual reality headset and feel as if they are in that same classroom,” explains Spio. “In a sense, you can walk into someone’s classroom, feel the presence and be able to have the benefit of a real-time interaction with that professor no matter where you are in the world. One professor can now be teaching 100,000 people all at the same time.”

“If I put on a headset and it puts me in Paris, my brain actually files away the memory that I visited the Eiffel Tower. So, a year later, when you recall what you saw in the virtual world, the accuracy of that recall is much, much higher than people recalling the same thing they had read about even a week later. For the first time, we are manufacturing memories using technology.”

CEEK is also helping clients develop healthcare training modules to teach CPR and other techniques. They are able to train people to provide healthcare, and there is even technology being developed for doctors to actually provide healthcare such as force feedback gloves that would allow doctors to “touch” patients on the other side of the world to conduct examinations, like feeling a lump under the skin, and deliver make a real diagnosis. Virtual reality is also being used in therapy to help people dealing with phobias and post-traumatic stress disorders.

With all these applications, Spio believes we are only beginning to comprehend the possibilities for virtual reality and its impact on our world, but none more so than the impact it may have on the children of the world like the child she once was in Ghana.