Countless devices are connected through wireless media  and all of those phones, sensors and smart home networks are putting increasing pressure on the radio frequency (RF) spectrum. Right now, the spectrum is divided into exclusively licensed bands, thus creating enormous inefficiency in the overall system. An unused band by any carrier can not accommodate users from other networks, a wasted opportunity for improving the overall efficiency.

While researchers have been pushing for a more altruistic wireless system where spectrum sharing is encouraged, progresses are slow and confined to theory on paper. The Defense Advanced Research Projects Agency (DARPA) is looking at how to accelerate the paradigm shift from the century-old licensing process to a more efficient system where spectrum sharing is incentivized. 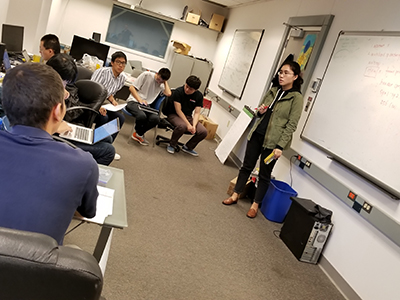 The Air Orange team works on its spectrum-sharing project.

“Basically, instead of that rigid framework of each has its own territory, you are allowed to share spectrum,” says Biao Chen, professor of electrical engineering and computer in the College of Engineering and Computer Science.

DARPA set up a competition unlike any other. The Syracuse University graduate students and undergraduates on the Air Orange team are working to develop a software radio network that can efficiently transmit data wirelessly—not by pushing other data aside, but by helping machines learn how to share the road.

“If you put a radio right here, without telling it anything, it can work with any other radios in the area so everyone—even a  WiFi access point or a garage door opener—can share the spectrum in an efficient way,” says master’s student Eric Jiang. “If we develop a radio in such a way that it is mindful to other radios, it shouldn’t be a big problem if other radios do the same thing. It is sort of this utopia idea.”

Air Orange is one of just 30 teams selected for Phase One of the Spectrum Collaboration Challenge. On Dec. 13, its software will be put into an environment called the coliseum that emulates data and different transmission environments. To advance, its system has to be able to perform well—not only by delivering their own data in a timely manner, but doing so in a manner that helps other teams to achieve the same. The biggest challenge is that they have to do so completely unaware of who other teams are and how their radio network operates.

“We are forbidden to talk to any of the other teams that participate in the collaboration, so it is kind of like a blind test. Just throw a radio in there, into the environment, and the goal is, I don’t know any of the other radios in this environment but I will be able to figure out a way to effectively and efficiently collaborate with them to share the limited spectrum,” says Jiang.

It is a different way to look at competition. The winning teams will not crush their opponents—they will be the most collaborative

“It’s not you win, other people lose. It’s more, you win and other people win so we both benefit from it,” says Xin Zhang ’18.

“It doesn’t make sense to hurt other teams—you are essentially hurting yourself. The goal is to figure out a solution to share this common resource,” says Jiang.

The interdisciplinary Air Orange team is made up of electrical engineering and computer science students. They have been testing their system in a series of scrimmages. Chen and the team meet daily to discuss improvements to their software.

“Every scrimmage has a deadline of midnight Sunday, which basically the weekend before is going to be crazy,” says Chen.

The final competition is to be held in 2020 and the wining team will receive a grand prize of $2 million.