It is easy to underestimate a robot that only stands a foot and half tall, but the latest design by Orange Robotics is full of surprises. It can climb stairs, throw a tennis ball, hit a golf ball, sprint and lift weights. 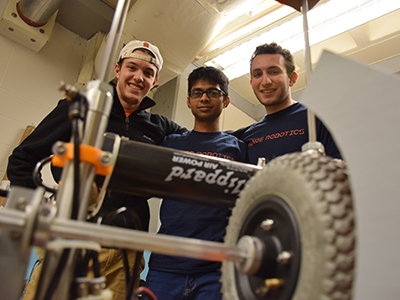 Graduate student Sounak Das, Sam Meyers ’18 and David Parran ’18 took the robot they built to the American Society of Mechanical Engineers (ASME) Student Design Competition at Tennessee Tech University in April to take on other robots from colleges across the country. Orange Robotics finished eighth out of 48 teams in its first competition and its members are starting to think about their next model.

“Every competition has a problem statement, you design for it,” says Das.

Competitions like the ASME Student Design event require robots be able to able to accomplish multiple tasks and also fit inside a 50-centimeter cube.

“You do run into problems and you find solutions,” says Parran.

Orange Robotics is looking for new members interested in joining the team. They welcome students from any discipline at Syracuse University.

“We learn to work from a budget, and plan like any business would,” says Das.

“The limit of what you are doing is your imagination,” says Das.

To learn more about Orange Robotics, visit the Facebook page or email Meyers at sdmeyers@syr.edu.